Ann Coulter’s lead paragraph in her latest polemic would be hilarious if it weren’t so Coulteresque.

“Sorry this column is late. I got raped again on the way home. Twice. I should clarify – by ‘raped,’ I mean that two seductive Barry White songs came on the radio, which, according to the University of Virginia, constitutes rape.”[1] 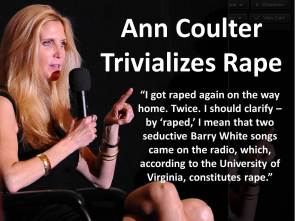 If anyone else had written that, one could say it beautifully encapsulates the folly of redefining terms to the point where they cease to have meaning. Like Rush Limbaugh, Coulter is using absurdity to illustrate the absurd. But Coulter has no credibility on this issue to make that point.

In her column, Coulter does makes a superb point, “If we’re in the middle of a college-rape epidemic, why do all the cases liberals promote keep turning out to be hoaxes? Maybe I’m overthinking this, but wouldn’t a real rape be more persuasive?”[2]

However, Coulter’s brilliant analysis of the alleged “rape crisis” on college campuses makes one’s mind boggle over Coulter’s own disingenuous on rape.

The previous night on Hannity, Coulter lamented the trivialization of rape by all of these rape hoaxes. But Coulter herself has – for years – trivialized rape.

No matter what Ann Coulter says, it is hard to believe that she cares about rape victims or the offspring of rape. She does not.

Coulter blithely speaks of raping the planet as our God-given duty, and, just this year, made numerous accusations of rape. Indeed, Coulter claimed that she was being raped.

At a conference in March, Coulter likened immigration to rape. In her own words:

“No, [immigration] isn’t a natural process. It’s like you’re being raped and the guy is telling you, ‘Sorry, my penis is in you. Nothing you can do about it.’ … No, you’re raping me! Demographics are changing by force. There is nothing natural about it.”[3]

Those bolded words – “you’re raping me” – were shouted, with gasps from the audience! 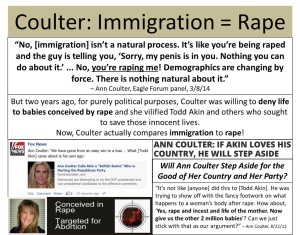 For nearly two decades, Coulter has railed against rape hoaxes, such as Tawana Brawley, which were perpetrated to make political points. But Coulter’s real attitude toward rape is cavalier. Babies conceived in rape have no value in her eyes. Coulter speaks favorably of raping the planet. And, now, she claims immigrants are raping her! 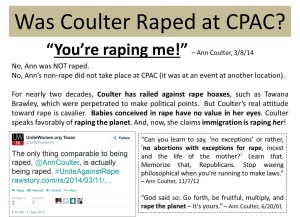 Only a month later, Coulter again diluted the meaning and diminished the significance of rape by making false accusations against the mayor of New York City. Coulter marred an otherwise exemplary column on the rapists of the Central Park jogger by invoking the Rape Card again. Coulter concluded that column with these words:

“But now de Blasio wants to hold down our legs while the ‘Central Park Five’ rape us, again.”[4] 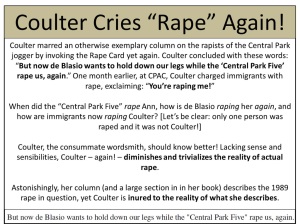 When did the “Central Park Five” rape Ann, how is de Blasio raping her again, and how are immigrants now raping Coulter? (Let’s be clear: only one person was raped and it was not Coulter!)

Astonishingly, her column (and a large section in in her book) describes the 1989 rape in question, yet Coulter is inured to the reality of what she describes.

Moreover, Coulter thinks life in the womb is a “philosophical” argument and wants pro-lifers to be pragmatic by permitting human beings who are conceived in rape to be aborted.

She insists, “Can you learn to say, ‘no exceptions’ or rather, ‘no abortions with exceptions for rape, incest and the life of the mother?’ Learn that. Memorize that. Stop waxing philosophical when you’re running to make laws.”[6] 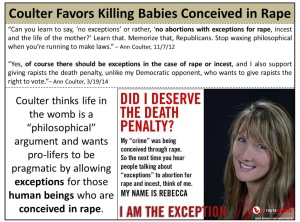 Absolving Romney for his disastrous defeat in 2012, Coulter blamed pro-lifers:

“The last two weeks of the campaign were consumed with discussions of women’s ‘reproductive rights,’ not because of anything Romney did, but because these two idiots [Akin and Mourdock] decided to come out against abortion in the case of rape and incest.”

Coulter’s disregard for human life is clear in her pretzel-twisted logic:

“No law is ever going to require a woman to bear the child of her rapist. Yes, it’s every bit as much a life as an unborn child that is not the product of rape. But sentient human beings are capable of drawing gradations along a line.”

A child of rape is “every bit as much a life as an unborn child that is not the product of rape,” yet that child’s life is forfeit for political reasons.[7]

Ethics have never been Coulter’s forte.

Update: Not long after this column was posted, Coulter suggested that physical violence usually accompanies rape, like “being hit on the head with a brick. People know what a rape is, and to have girls trying to get attention from Lena Dunham to this poor psychotic at UVA … ( Lars Larson Show, 12/11/14).

Coulter has a surprisingly different perspective when it comes to her own safety:

[5]       As brilliant as Coulter can be, she lacks sound judgment, which is one of many reasons why we should Never Trust Ann Coulter – at ANY Age, at www.coulterwatch.com/never.pdf.