Coulter has written yet another diatribe[1] against Hillary Clinton, again contending that “the smartest woman in the world is not only arrogant and corrupt, but incredibly stupid.”[2]

To prove her point, Coulter lists a series of scandals and controversies, culminating with Hillary’s destruction of public records. But, as I’ve contended, this is not proof of stupidity. Rather, it is further proof of arrogance and corruption. 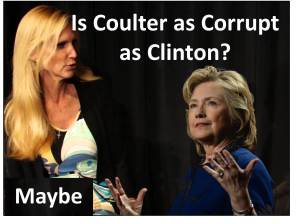 According to Coulter, Hillary must be stupid to be involved in so many scandals and behave so unethically – so often![3]

Coulter’s reasoning: “I think Hillary’s just really dumb. … it’s so stupid, it is such a self-inflicted wound … With her, it’s always – it’s just something that is so stupid.”[4]

But is that true? Let’s take Coulter for an example. Her intelligence has never been questioned by me. At times, she is brilliant.[5] But she is also integrity-challenged. One scandal or controversy after another.[6]

Consider this sampling. Coulter has …

Are these the actions of a bright person, or a stupid one?

IQ is not the parameter. The answer lies elsewhere: integrity.

But Coulter has always felt superior to most people, even to her peers and her colleagues.[17]

Coulter was born and bred an elite who came to believe her own press.[18]

Ann and Hillary share so many character traits[19] that Coulter had to find something to differentiate herself from Clinton. That something – stupidity – is a smokescreen. Coulter would prefer to believe that Clinton is stupid as opposed to “corrupt and venal,”[20] because those are traits she shares with the former First Lady.

Hillary has survived this long because she knows how to manipulate the system; she possesses money, power, and influence; and she has a network of colleagues and friends who will protect her no matter what she does. Hillary keeps getting away with immoral, illegal, and unethical behavior because she has never been held accountable for that behavior. Her ability to arrogantly get away with every escapade emboldens her in her arrogance and encourages further escapades.

The entire paragraph above applies equally to Ann.

[1]               Did I say “diatribe?” Yes. In addition to calling Hillary a “chubby” “ho,” Coulter wrote: “She’s a bore. She has the warmth of an Arctic ice floe. She hates people, and they hate her. She makes children cry and puppies shy away from her. Nobody wants to watch her wallow around in those neon pantsuits for the next five years.”