As America braces for a heightened terrorist threat over this Fourth of July weekend, Tucker Carlson exclaimed, “Of course, we’re going to raise the fist of defiance against tyranny.”[1]

Meanwhile, Ann Coulter – fiery neoconservative turned xenophobic paleo-conservative – utterly rejects reality, claiming ISIS poses no threat to Americans in the homeland. All to promote her brand, her book, and herself. 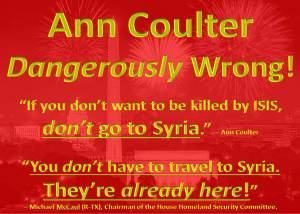 Yes, Coulter vigorously denies what everyone else knows to be true: ISIS is in America.[2] But, according to Coulter, the media’s focus on ISIS is part of a grand conspiracy to distract Americans from the real threat to America: immigration. (Not coincidentally, the subject of her latest book.)[3]

Even the Obama administration admits what it is reluctant to acknowledge (and what Coulter denies)[4]: ISIS poses a grave threat to Americans at home.

Coulter claims, “If you don’t want to be killed by ISIS, don’t go to Syria.”[5] In contrast, Michael McCaul (R-TX), Chairman of the House Homeland Security Committee, warns: “They’re already in the United States. You don’t have to travel to Syria. They’re already here!”

Yes, indeed, ISIS is here, posing a threat to every American.[7]

Coulter risks American lives to promote her own agenda and to sell herself and her books.[8]

Update: In the wake of the terrorist attack in Chattanooga, TN, on July 16th, we should recall Coulter’s words just nine days earlier: “Yes, it could have been any weekend. I’ve noticed, we’ve all been warned all week, ‘Watch out for ISIS! Watch out for ISIS this weekend.’ And no, instead, Americans were killed by immigrants.”[9]

[8]              See Propaganda: Orwell in the Age of Ann Coulter, available as a free download at www.coulterwatch.com/propaganda.pdf.