John the Baptist lost his head for proclaiming God’s truth and holiness. Ann Coulter has betrayed all that she once believed in to promote the ungodly and profane.[1]

Now Coulter is a champion of New York Values, the kind she has opposed her entire adult life. 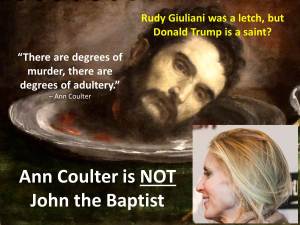 In an astonishing dialogue with Eric Metaxas, Coulter defended Trump’s vice as a virtue![2] In response to Metaxas’ declaration, “His vice of choice was adultery,” Coulter replied, “Allegedly.” Allegedly? Trump boasts of his conquests and his sexual desire for his own daughter!

According to Coulter, Trump’s long-term affair was justified because “he did marry her.” (No comment about his subsequent divorce or any of his affairs.) Coulter even claimed, “There are degrees of murder, there are degrees of adultery.” (However, all murderers are punished!)

Coulter will countenance any evil so long as she gets her way. In this case, she wants Trump to build a wall in her honor. She said, “It’s not his strongest point, oh well. He’s the only one who’s going to build the wall.” (Except, Trump will not build the wall Coulter wants.[3] Cruz will!)[4]

Nevertheless, Coulter continues to reject the sacred for the profane.

Until now, Coulter has condemned adultery (and divorce) throughout her professional career, chastising any public figures caught in that practice. She is wont to call the Democrat Party the party of “killing, lying, adultery, thievery, envy.”

For Coulter, admirable people cannot be adulterers. Coulter once declared, “None of the leaders I admire [have had affairs].”[5] (Until Trump!)

Then, faithfulness and kept promises mattered to Coulter. Now, not so much.

A stickler for details and the letter of the law (until Trump, that is – now, “THE RULES”[6] no longer matter), Coulter has always stridently decried divorce, citing it’s close connection with adultery. Coulter explained:

What about Trump’s confessed adulterous affairs and two divorces?

Coulter also favors news outlets and tabloids exposing prominent figures as adulterers. She said, “I’m all for outing adulterers, whether it’s some Hollywood starlet telling on a politician. I love that.”[8]

An effusive Coulter continued, “Oh, yeah, I love that. It’s like having all these Bernie Goetzs of adultery out there. They’re preventing people from committing adultery for fear of being exposed.”

But Trump, her Savior,[9] is now off limits!

“It seems to me that once a woman puts her sexual attractiveness at issue by, for example, competing sexually for the husbands of other women, she’s made her relative pulchritude fair game. Indeed, it is impossible to comprehend why some Republicans are still defending Giuliani’s honor without taking note of how homely his mistresses are.” (Isn’t Coulter now defending Trump’s honor?)

Coulter’s diatribe continued: “On every possible scale – body, face, youthful appearance, accomplishments, style, pedigree, IQ – Giuliani’s wife is several orders of magnitude superior to his apparent mistresses. His latest acquisition is even more squat and frumpy than the last consort.”

Rudy Giuliani was a letch, but Donald Trump is a saint?

In contrast to Coulter, John the Baptist was devoted to righteousness and holy living. John repeatedly condemned King Herod for his sexual deviancy – and lost his head for it.

“But when Herod heard, he said, ‘This is John, whom I beheaded; he has been raised from the dead!’ For Herod himself had sent and laid hold of John, and bound him in prison for the sake of Herodias, his brother Philip’s wife; for he had married her. Because John had said to Herod, ‘It is not lawful for you to have your brother’s wife.’”

Jesus persistently condemned adultery, going so far as to say, “You have heard that it was said to those of old, ‘You shall not commit adultery.’ But I say to you that whoever looks at a woman to lust for her has already committed adultery with her in his heart (Mt. 5:27-28).”

Coulter once understood and agreed with that teaching, but now, for political purposes, Coulter calls evil good and good evil. Trump even lusts for his own daughter!

Less than a year ago, Coulter bragged, “I’ve never sucked up to anybody. I’ve always said what I believe.”[11]