Ann Coulter, the author of In Trump We Trust, doesn’t trust Trump. 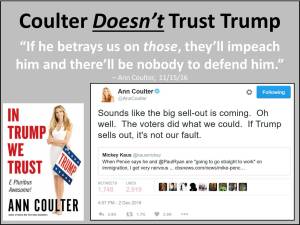 She never really did.

Her decades-long pattern of behavior continued with her promotion of Donald Trump (and herself).

First, Coulter browbeat the electorate to vote for Trump, insisting he was the only person who could save America. Now, Coulter bullies, cajoles, and threatens Trump to do what she wants done.

Let’s remember the context. For years, Coulter did the very same thing with Romney. Remember, Coulter was careful to tell Romney that he owed her (personally). Coulter rammed Romney down our throats, promising us that he was the best and would get the job done, all the while warning Romney that he better do that very thing (see Case Study #6, Propaganda: Orwell in the Age of Ann Coulter).

But did Coulter ever trust Trump?

Hardly. Coulter repeatedly told Trump that he’d better do what he promised her he would do because of all the sacrifices she had made for him.

According to The Times, Coulter told Trump, “I’m the only one losing money trying to get you in the White House, you’re going to listen to me.” After Trump’s immigration flip-flop, a piqued Coulter joked, “He just said something stupid, which he’s done before, and he will do again … he does need a little slap now and then.”

Coulter’s face-slaps frequently include Twitter tirades and jeremiads against the only person in the world who can save America (according to her).

Coulter even threatened impeachment against her beloved Savior:  “The wall and deporting illegals … renegotiating trade deals and not starting pointless wars – those are the big ones. If he betrays us on those, they’ll impeach him and there’ll be nobody to defend him.”

Coulter is absolutely terrified that she backed the wrong horse, that Trump will prove as unscrupulous as she is, thus jeopardizing what’s left of her own career. Coulter’s fate is inextricably linked to Trump’s.

In her last column in November, Coulter ominously described “How Trump Could Ruin His Presidency.” How? But not doing what Coulter tells him. Coulter succinctly wrote:

Also, “But if he breaks a major campaign promise, his supporters will turn on him with a blind ferocity, dwarfing their rage toward Jeb! because Trump’s is the more exquisite con. He will have duped them. And he will never, ever, ever get them back.”

Also, “If Trump betrays voters on immigration, he can have as many rallies as he wants, but Americans will say, Been there, done that — you screwed us. He will never escape the stink of broken campaign promises.”

Finally, “Whether he’s listening or not, his supporters are screaming: TRUMP! NOW! TAKE THE SHOT!!!”

Can you hear Coulter screaming?

In the 1990s, members of Free Republic loved Coulter, called her the “goddess of the conservative movement,” and cherished everything she said and did. That has no longer been true for many years.

Here are a few highlights from just one Free Republic thread:

“Ann can be NUTS, at times ( look how much she LOVED and pushed for that POS Romney!) and is ALWAYS looking for something to rant about. She does poorly when things are going well.”

“Hannity wanted to know WHY since she has Trump’s ear, she didn’t just call him up and since she knows his closest adviser/team why she just didn’t call them. She sputtered and fumed and then claimed that she had and went back to attacking. Perhaps ‘dear’ Ann isn’t as ‘CONNECTED’ as she claims to be. ;^)”

“I don’t dispute that she’s smart, but I’ll be honest with you and say she has a really grating way about her. If Hillary Clinton is ‘America’s Ex-Wife,’ I’d say Ann Coulter is ‘America’s Ex-Girlfriend.’”

“She’s being a stupid snowflake….demanding that SHE be allowed to pick Trump’s team; not him. And she just proved, beyond a shadow of a doubt, that she holds NO sway and worse…is NOT ‘in’ with Trump. She’s a damned DRAMA QUEEN and a poser.”

“She is just as world class a troll at generating attention and self-promotion as Trump is. Ann Coulter, first and foremost, is going to do what is in Ann Coulter’s financial interests, she lives by talking head appearances, book sales, social media, web sites, all of which demand promotion and the setting of narratives. Coulter’s tweet means nothing, other than she needs attention. Stop worrying.”

“Ann, go get your head meds and eat the entire damn bottle.”

“She’s a brilliant writer but…this woman is just scitzo. I don’t know how else to put it.”

[A new book, #NeverTrump: Coulter’s Alt-Right Utopia, sheds some light on the #OnlyTrump movement and its Alt-Right constituency. It is now available on Amazon at http://amzn.to/2fzA9Mr.]