Ann Hart Coulter is a modern-day Know Nothing. 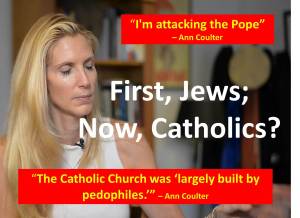 Following her anti-Semitic rant[1] against Jews and Israel,[2] Coulter has now embarked upon a Know Nothing approach to Catholicism. This is especially strange as she attended a private Catholic school until she entered high school. One would think she would know better.

Among Coulter’s many tweets disparaging the Catholic Church (emphasis added):

Coulter has a distinctly WASP (White and Protestant)[3] view of America. For years now, Coulter has hated immigrants.[4] Her nativism has been especially pronounced[5] this year. Coulter even hates the idea of Christians serving overseas.[6] Indeed, she insists that all other nations suck.[7]

During the 2012 election cycle, Coulter compared social conservative Rick Santorum to ultra-liberal Ted Kennedy – because of their shared Catholicism. To Coulter, Santorum was “more Catholic than conservative.”

Last year, Coulter condemned Catholics as “moral show-offs” and “fake Christians,” expressing contempt for church leaders and parishioners alike whose theology compels them to adopt political positions with which she disagrees.

Coulter claims that American Catholics are better than Roman Catholics. Yet, Coulter condemns liberal Catholics in America for their liberalism, while the traditional pro-life Roman Catholic doctrines remain extant. Ironically, Coulter has waged war on pro-lifers for defending the unborn while claiming to be totally pro-life herself. Confused? So is Coulter.

Coulter does not make sense. To reiterate, she claims that American Catholics are better than Roman Catholics because they have been assimilated. Yet, many of those Catholics who have been assimilated into American culture have become more secularized and embraced leftwing views on social issues (abortion, homosexuality, marriage, etc.) while the foreign Roman Catholics hold the views that Coulter cherishes. Reality is the exact opposite of what Coulter claims it is.

As noted by National Memo, Coulter’s ire at Latin American Catholics may stem from her anti-immigration thesis in Adios, America! They correct Coulter on the historical record:

“Catholics in the New World had easily become Americans following the Louisiana Purchase from France in 1803, and the acquisition of Florida from Spain in 1819. And Catholics did indeed play a role in the early polity of the U.S. This included one signer of the Declaration of Independence, Charles Carroll of Maryland, and two delegates to the Constitutional Convention of 1787, Daniel Carroll of Maryland (and cousin of Charles), plus Thomas Fitzsimmons of Pennsylvania.”

Catholics in the Revolutionary War

Contrary to Coulter’s assertions, Catholics were among the “American settlers” Coulter cherishes. And they fought for America! Several of America’s Founding Fathers were Catholic.

From “Catholics and the Founding”:

“The preeminent Catholic patriot was undoubtedly Charles Carroll of Carrollton. Heir to the fortune of an early Maryland Catholic family, it was said that Carroll risked more (in financial terms) than any other when he became the only Catholic to sign the Declaration of Independence.”

“Carroll’s cousin, John, was also an important figure in Revolutionary America. John Carroll had been a Jesuit priest before the suppression of the order by Pope Clement XIV and had continued to minister as one of the colonies’ few priests. Uniquely positioned as an ardent patriot and a Catholic religious leader, he was called upon by the Continental Congress to join Benjamin Franklin, Samuel Chase and Charles Carroll on an unsuccessful mission to Canada to try to convince the colonies’ northern neighbor to maintain neutrality during the war with Britain. Carroll would become the first American bishop in 1789.”

“A thousand miles to the west, another Catholic with less economic clout and fewer connections would also play an important part in the military plans of the Americans. Father Pierre Gibault was a missionary of French descent in southwestern Indiana. When the Virginia militia under Colonel George Rogers Clark entered the area, Gibault and others met the American commander and pledged the support of the region to the forces of independence in return for assurances of religious freedom. Against the wishes of the bishop of Quebec, Gibault led the French residents of the Vincennes region in cooperating with the Americans.”