Joy Reid is fanatically pro-abortion. But what of Ann Coulter? The answer might surprise you. 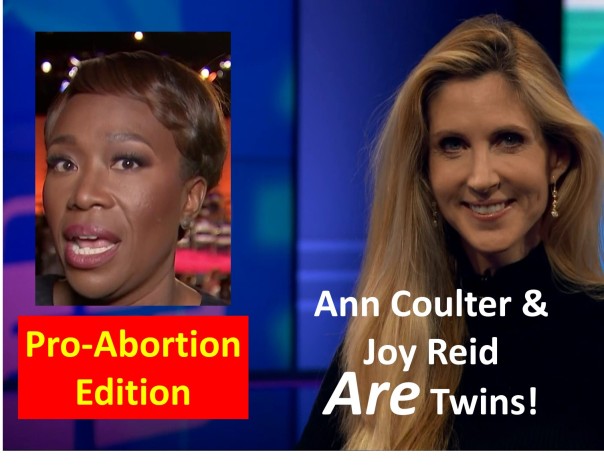 But is she really pro-life? If so, why has she been at odds with the pro-life movement for fully two decades?

In 2000, Coulter vilified GOP presidential candidate Gary Bauer and other pro-lifers who were seeking a constitutional remedy to abortion. Her essay was titled, “Must Christian conservatives be fascists?” Coulter’s purpose was to preserve George W. Bush’s candidacy from the wrath of the abortion industry.

Ever since, Coulter has subordinated pro-life considerations to whatever matters she considers more immediate or more expedient. Coulter has, in fact, rejected many potential pro-life candidates for others she deemed more electable.[3]

For purely political reasons, Coulter blamed pro-lifers for Republican defeat in 2012, writing, “Can you learn to say, ‘no exceptions’ or rather, ‘no abortions with exceptions for rape, incest and the life of the mother?’ Learn that. Memorize that. Stop waxing philosophical when you’re running to make laws.”[4]

Yes, Coulter blamed pro-lifers for Romney’s defeat: “The last two weeks of the campaign were consumed with discussions of women’s ‘reproductive rights,’ not because of anything Romney did, but because these two idiots [Akin and Mourdock] decided to come out against abortion in the case of rape and incest.”

Moreover, Coulter thinks life in the womb is a “philosophical” argument and wants pro-lifers to be pragmatic by permitting human beings who are conceived in rape to be aborted. Coulter’s disregard for human life is clear in her pretzel-twisted logic:

“No law is ever going to require a woman to bear the child of her rapist. Yes, it’s every bit as much a life as an unborn child that is not the product of rape. But sentient human beings are capable of drawing gradations along a line.”

Gradations? Coulter refuses to drawn the clear and distinct lines that science and scripture dictate: human life is human from the point of conception.

Yet Ann (“I am totally pro-life”) Coulter continues to attack pro-lifers.

Coulter has written multiple tweets and columns questioning the motives – and character – of Republicans opposed to abortion. Coulter calls them “pathetic,” “weak-kneed” “sissies” and “pussies” trying “to prove their toughness by being pro-life.”

Coulter demonstrated her unscrupulousness and willingness to betray any principle for the sake of political expediency, tweeting, “I don’t care if @realDonaldTrump wants to perform abortions in White House after this immigration policy paper. http://bit.ly/1EvT3Ja.”[5]

Coulter passionately attacked conservatives for pursuing a pro-life agenda. Coulter began her rant ridiculing those who seek to defend the lives of the unborn by saying, “I am getting very, very bored with [conservatives] being bad asses on abortion.”

“these Republicans who want to prove what hairy-chested conservatives they are by endlessly talking about immigration [she meant abortion]. No, we have won that, Republicans. We have won it within the Republican Party and that’s all we’re gonna be able to win it in until Roe v. Wade is overturned.”

“They are cowards. They’re unimaginative. They’re not very smart.”

“… their big thing is to keep talking about this abortion thing. Well, that’s great if it were 1977. I’d think you’re really brave and you’re doing a great thing. But I kind of think you’re just a putz imitating what was good forty years ago at this point.”[6]

For Coulter, it is never the right time to defend the unborn,[7] to help those who are regarded as somehow “below human.”

Why would Ann, who often treats people out of the womb so callously, care about those who are still in the womb?

Despite their personal enmity and political differences, Joy Reid and Ann Coulter are remarkably alike in their polemical nature and viewpoints in certain areas: anti-Mexican, anti-Semitic, death threats, hate speech, rape fantasies, identity politics, and even misogyny. To that, we can add hostility toward Christians.

Joy Reid regards evangelical beliefs as fiction, fantasy. She decries mainstream Christianity as opportunistic and apathetic toward those in need. As noted in Christian Post, “Joy Reid’s declaration against faith and family are part and parcel of a greater spiritual movement among the liberal elite to destroy both faith in God and the family.” Indeed, Reid regards “Church … family … police … military … the national anthem” as anachronistic and old-fashioned, things to be forgotten. Reid even attacked Sarah Palin for displaying a Christmas tree – on Christmas!

Ann Coulter has opposed Christians for fully two decades (while claiming to be a Christian!) Coulter has repeatedly condemned Christian missionaries for daring to fulfill the Great Commission in foreign lands, aiding those who are poor, sick, and in need. She calls Christians heeding their consciences “fake Christians” and attacks Christians for being godly. Further, Coulter demands that Christian refugees from genocide overseas be martyred. Moreover, Coulter’s WASP worldview compels her to continually denigrate Catholics.

In many ways, Joy Reid and Ann Coulter are twins. Both are openly hostile to Christianity while one – Ann Coulter – actually claims to be a Christian. Out of the abundance of the heart, the mouth speaks, revealing the truth.

Arch-left commentator Joy Reid and alt-right polemicist Ann Coulter hate each other (and one another’s politics), yet they have many traits in common. (One trait which markedly distinguishes the two is that Reid will actually apologize when she screws up.)

Ann and Joy have frequently butted heads on national television, with mixed results. But have they ever looked into the mirror of their own souls? If they had, they would have seen similarities in their viewpoints (Identity Politics) and polemical style.

The most recent kerfuffle began with an injudicious Roseanne Barr tweet which caused a meltdown on the Left. Just days later, Samantha Bee’s hateful attack on conservatives put a spotlight on liberal hypocrisy.

Then Joy Reid’s hateful attacks on whole groups of people bubbled up into the national consciousness.

Conservatives were quick to highlight Reid’s many attacks on Coulter, without realizing that Coulter shares Reid’s modus operandi and, in some areas, polemical perspective and nature.

Here are a few of Reid’s remarks regarding Coulter: 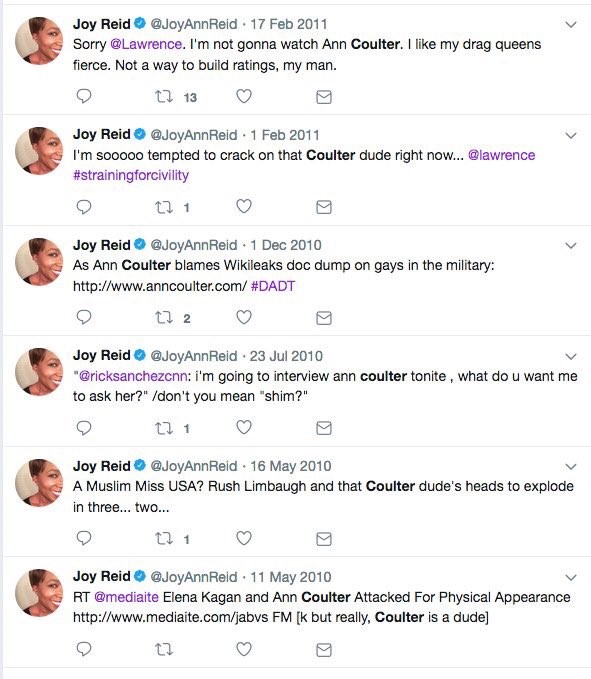 What commonalities can be found between Reid and Coulter? Many. Here are just a few.

Coulter has, in fact, attacked women (for being women and on the basis of this looks and lack of intelligence) for around three decades. [See chapter 10,”Equality: Self-Evident Truths,” The Gospel According to Ann Coulter and chapter 7, “Spawn of Satan Convention,” The Beauty of Conservatism.]

Coulter calls herself a “polemicist” and says she enjoys her “vitriol.” [See Chapter 8, “Polemics R Us,” The Beauty of Conservatism.]

I tweeted: “She sounds an awful lot like @AnnCoulter who for several years now has denounced Mexican rapist culture and illegals who take jobs & welfare from Americans. http://wp.me/p4jHFp-6A.”

I tweeted: “Reid has savagely attacked @AnnCoulter yet they both love Identity Politics and both have a long history of #Antisemitism #AnnCoulter http://wp.me/p4jHFp-f4 .”

I tweeted: “Like Reid, @AnnCoulter is OK with death threats and rape jokes. Many of #AnnCoulter‘s “jokes” preceded Reid’s and Coulter has NEVER apologized. http://wp.me/p4jHFp-fY .”

[See “Coulter OK with Her Death Threats” and Appendix 1, “Sampling of Coulter’s Elimination Rhetoric,” The Gospel According to Ann Coulter.]

I tweeted: “Like Reid, @AnnCoulter is OK with death threats and rape jokes. Many of #AnnCoulter‘s “jokes” preceded Reid’s and Coulter has NEVER apologized. http://wp.me/p4jHFp-fY .”

I tweeted: “Reid has savagely attacked @AnnCoulter yet they both love Identity Politics and both have a long history of #Antisemitism #AnnCoulter http://wp.me/p4jHFp-f4 .”

If you regard Joy Reid’s words and worldview as reprehensible, then you should so regard Ann Coulter’s.