Despite their personal enmity and political differences, Joy Reid and Ann Coulter are remarkably alike in their polemical nature and viewpoints in certain areas: anti-Mexican, anti-Semitic, death threats, hate speech, rape fantasies, identity politics, and even misogyny. To that, we can add hostility toward Christians. 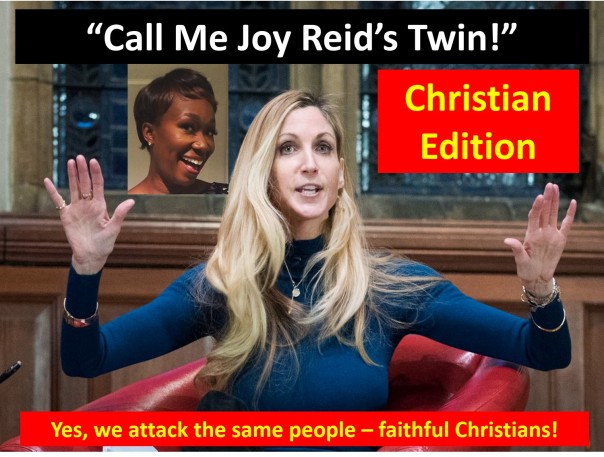 Joy Reid regards evangelical beliefs as fiction, fantasy. She decries mainstream Christianity as opportunistic and apathetic toward those in need. As noted in Christian Post, “Joy Reid’s declaration against faith and family are part and parcel of a greater spiritual movement among the liberal elite to destroy both faith in God and the family.” Indeed, Reid regards “Church … family … police … military … the national anthem” as anachronistic and old-fashioned, things to be forgotten. Reid even attacked Sarah Palin for displaying a Christmas tree – on Christmas!

Ann Coulter has opposed Christians for fully two decades (while claiming to be a Christian!) Coulter has repeatedly condemned Christian missionaries for daring to fulfill the Great Commission in foreign lands, aiding those who are poor, sick, and in need. She calls Christians heeding their consciences “fake Christians” and attacks Christians for being godly. Further, Coulter demands that Christian refugees from genocide overseas be martyred. Moreover, Coulter’s WASP worldview compels her to continually denigrate Catholics.

In many ways, Joy Reid and Ann Coulter are twins. Both are openly hostile to Christianity while one – Ann Coulter – actually claims to be a Christian. Out of the abundance of the heart, the mouth speaks, revealing the truth.