In 2017, Coulter was undeservedly hailed a valiant heroine for the Battle at Berkeley, yet her perceived defiance of leftist mobs and censoring administrators was really not at all courageous.

In fact, Coulter never expected or intended to give a speech at Berkeley! It was all a clever ruse and publicity stunt. Bravado, not bravery, marked Coulter’s Berkeley bluff.

The sole purpose of this event was not to speak but to prove censorship of conservative speakers. (Coulter offers polemics, not persuasion. The organizers picked the person most likely to provoke left-wing activists on campus.)

After successfully portraying herself as a courageous free speech warrior – having gotten exactly what she wanted: publicity and a new image – Coulter did not give what would have been a truly “free” (no honorarium) speech in what she herself insisted was the “safest place on earth” for her.

Before getting into details, let’s recall that Berkeley has justifiably been almost universally condemned (except by some on the far left) for not allowing Coulter to speak. Nevertheless, Coulter is not the courageous heroine she would have you believe her to be.

(This is a very abbreviated extract from a case study in Joker: Ann Coulter Unplugged.)

I gave Ann an Alamo Award in 1997 for her unquestioned courage – at that time – in speaking truth to power, at the risk of losing her livelihood. At Berkeley, Coulter risked nothing whatsoever. Indeed, regardless of the outcome, Coulter expected to gain that which she sought: publicity and an image of being a heroic-martyr.

This epic battle of wills pitting liberty lovers against left-wing mobs and academic censors saturated national news coverage. Coulter’s gambit was actually just a PR stunt from the very beginning. And it worked.

The Washington Post reported: “In a classic case of ‘heads I win, tails you lose,’ conservative provocateur Ann Coulter emerged from last week’s events at the University of California at Berkeley as a free-speech martyr.”

Coulter couldn’t lose. That was the plan from the start. It was all braggadocio and bravado, a marketing ploy explicitly designed to reinvigorate her reputation and career.

Here’s the actual timeline of events according to Coulter and her speech sponsors:

BridgeUSA and YAF sponsored Coulter’s speech. She knew – given riots at Milo Yiannopoulos’ event in February – that she wouldn’t be giving her speech. The university and/or rioters would surely shut it down.

Berkeley placed ever-demanding restrictions on Coulter’s speech. She insisted that YAF concede to every single demand. Coulter could not quit. She had to wait – and wait patiently she did (because she knew it was inevitable) – for Berkeley to cancel, making her a martyr. She told Tucker Carlson, “Well, they changed the rules every ten minutes. I kept agreeing to all of their conditions – they were hoping I would cancel.”

In this high-stakes game of chicken, Berkeley flinched. Berkeley caved and cancelled her speech, enabling Coulter to play the heroic victim of institutional censorship and mob rule.

Berkeley announced that it could not ensure the safety of the speaker and attendees. Then YAF folded. Coulter wrote, “We were on [the] cusp of victory and YAF backed down, refused to seek a court order or allow the College Republicans to request a court order.  It’s a sad day for free speech.”

Coulter’s sponsors caved. Coulter was incensed. Why? She wanted Berkeley to cave and herself be vindicated as a heroine. Instead, she would have to speak outdoors, something she did not want to do. Her rant in the above-linked video was a visual and verbal expression of the hatred within her heart – the source of her vitriol. 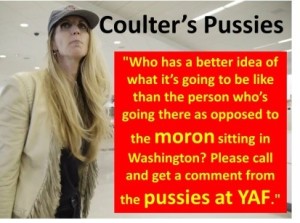 In the end, Gavin McInnes, her good friend and latest knight in shining armor, gave Coulter’s (hastily-written and extremely-short) speech on her behalf in Sproul Plaza. Coulter was there, in Berkeley, but not at that peaceful event. Afterward, she joined McInnes and supporters for drinks at George and Walt’s.

As noted above, Coulter exhibited genuine courage in 1996-97. Hence her Alamo Award.

Since then, Coulter has gotten edgier and edgier while simultaneously abandoning her principles and ideals. In doing so, Coulter has actually embraced her fears. Now she is desperately grasping for the glory she once had and which increasingly eludes her.

What she fears most is facing the truth about the person she has become. Moreover, Coulter fears that she is beyond redemption, so why not continue on her downward path. (Ann, My Redeemer Lives, and so does yours!)

Joker: Ann Coulter Unplugged provides an in-depth, detailed analysis in this holistic exposé of how and why Coulter has become such a warped human being.

Ann’s brokenness provides an object lesson for all of us and, hopefully, this book will act as an intervention to help Ann face her deep brokenness and motivate her to seek healing and restoration.