For over two decades, self-described controversialist Ann Coulter has been an ambulance chaser, exploiting local, regional, and national tragedies for partisan, political, and personal purposes.

Thereby, Coulter has exposed the callousness of her own heart, showing apathy for (indeed, cruelty toward) those innocents who are suffering these tragedies or those who are unwitting victims of her wrath. 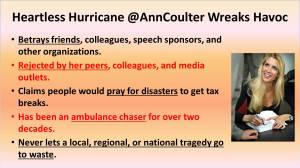 Since at least 1997, Coulter has betrayed a host of people from friends and colleagues to speech sponsors and other organizations. As a direct consequence of her treacherous behavior, most of her peers, sponsors, media outlets, and fans have rejected her.

Moerover, Coulter once doxxed Lydia Cornell for a whole year, ruthessly terrorizing her and her family.

Coulter’s tweets during Hurricane Dorian are illustrative of her “compassionate” nature toward humanity. But first, let’s revisit her views on natural disasters as expressed in 1996-97. (They haven’t changed, nor has she.)

In 1996, Coulter conceived this novel concept:

What? People would be praying for disaster? In order to not pay taxes?

Clearly, Coulter has no conception of the horrors that afflict people in these disasters: from the irreplaceable loss of property and personal possessions to bodily injury and loss of life, not to mention the trauma accompanying such catastrophes.

“Well, I have a slightly novel twist on it. I always thought that because there are a lot of disasters, I mean, this year alone there has been an enormous number, and the federal government, you know, jumps in and gives all of this financial assistance – which is, of course, taken from us to begin with. It’s not like the government is a profitable institution or a philanthropic institution. The only money it has comes from us. How about, any area hit by a disaster doesn’t have to pay taxes for the next five years? People would be praying for disasters in their areas.”

“They’re stealing our money, funneling it through Washington, and then sending it back to certain isolated areas. If we’re gonna designate the isolated areas anyway, we should say ‘No taxes.’”

“That is one of the most pathetic things about this whole system and that is the American people are so dependent on the federal government for, you know, their needs when a disaster strikes. Well, if the federal government weren’t stealing half of our money to begin with and then doling it out here and there in little favors, and the Democrats demagoging on this.”

“Don’t you think it seems to be incredibly stupid and inefficient for a centralized government to be sucking up all of our money and then having to take a vote to distribute it back to us on an as needed basis? Why should they start with our money?”

Coulter is correct that the federal government has intruded into far too many areas of the lives of American citizens and, I’m sure she is well aware of the impressive ways private charitable organizations step in to help in times of tragedy. However, Coulter seems ignorant of two aspects of natural disasters.

First, federal, state, and local governments have crucial roles in alleviating suffering and mitigating the dynamics of those particular disasters.

Second, Coulter utterly ignores the immediacy of the needs of the people experiencing these emergencies.

Coulter’s callousness toward the castrophic effects on the lives and livelihoods of people as a result of natural disasters was evident when Hurricanes Harvey and Irma targeted America in 2017.

In one tweet, Coulter obliguely claimed God’s wrath was being poured out on Houston for “electing a lesbian mayor.” Then she denied doing so. Coulter was roundly mocked for her suggestion and was also proven wrong about the identity of the mayor!

Many people on Twitter used her own style to mock Coulter.

But Coulter was not yet finished. In the midst of the carnage, Coulter offered this “joke”:

Upon hearing that illegal aliens might die in the disaster, Coulter tweeted: “It’s sucks to break the law.” (Misspelling in the original.)

Having learned absolutely nothing from her experiences, Coulter then mocked the impending disaster posed by Hurricane Irma, tweeting (in caps!): “HURRICANE UPDATE FROM MIAMI; RESIDENTS AT RISK OF DYING FROM BOREDOM.”

Coulter was lambasted for her “heartless humor.”

Two years later and nothing has changed. Coulter remains impenitent and heartless.

In a series of tweets, Coulter showed a total disregard for the magnitude of (and potential devastation that could be caused by) Hurricane Dorian. Instead, she politicized this event, using it to berate President Trump, attack Delta Airlines, excoriate illegal aliens, and mock the hurricane itself. 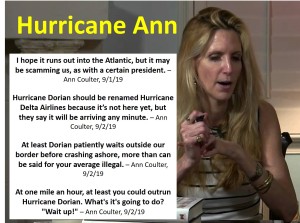 In her last tweet, Coulter ridiculed the stationary position of the hurricane over the Bahamas, ignoring its devastating impact on the chain of islands. Again, Twitter reprimanded Coulter. 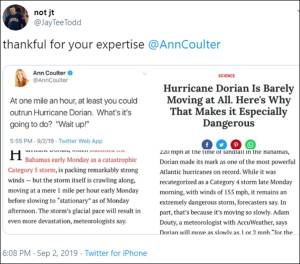 Why does Coulter persist in such nonsense?

Could it be that Coulter has a heart problem?