In the midst of an American Renaissance,[1] apocalyptic Ann Coulter heralds the end of days.

This she has done for two decades.

In the 2000 election, Coulter declared that a Gore victory would lead to Armageddon. In 2004, she claimed a Kerry victory would spell doom for America. Coulter tepidly endorsed McCain in 2008 (Get Drunk and Vote for McCain), although Romney was her true love for close to a dozen years.

In an interview for Amazon, Coulter said, “Insofar as the survival of the Republic is threatened by the election of John Kerry, I’d say 2004 is as big as it gets.”

Why? Post-9/11, terrorism was Coulter’s cause célèbre for over a decade.[2]

But over the past five years, Coulter has claimed that immigration is the only issue that matters! Why? For two reasons: Racial demographic changes would make whites a minority in America and Democrats would rule forever.

Trump has already blown away Coulter’s second contention: He has routed the Democrats[3] and thoroughly exposed their extremism to everyone.[4]

As for her first contention, what difference does it make? To a racist WASP like Ann, it is the most crucial measure of America and American identity.[5]

Once an anti-terrorism hawk, Coulter is now a dove, blithely dismissing the threat of ISIS at home and abroad. 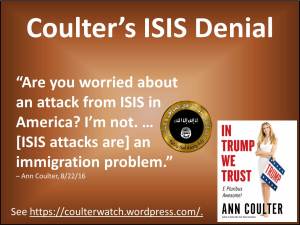 On the Eric Metaxas Show (10/11/19), Coulter said that America had a 50% chance of survival when Trump was elected but now it is only one percent!

She was more graphic speaking to the New York Post:

Like her kindred spirit, Alexandria Ocasio-Cortez,[7] Coulter is a provocative and hyperbolic doomsayer.

Joker addresses the physical, mental, emotional, psychological, familial, sexual, and spiritual dimensions which have shaped the Ann Coulter that we know today and it highlights both the positive and negative aspects of Coulter’s life and career.

Is Ann Coulter a Christian?

For over two decades, many people have asked that question and answered with a negative. But Ann, strangely, regards herself as one, boasting: “I’m an extraordinarily good Christian.”[1]

Do genuine Christians talk about themselves in that way? (Ann shuns humility like the plague.)

With the publication of her bestseller, Godless, in 2006, Coulter became a defacto religious authority, actually boasting about her own godliness. She frequently likened herself to Jesus Christ.

In recent years, Ann has developed the habit of commending sports figures who give thanks to God, even though she herself does not do so.

A recent Coulter tweet was very telling: about the “Godless media” and about Ann.

She accurately identified the Christophobic news media which excised a passionate plea by the brother of an innocent man murdered by a police officer. Coulter noted that the media ignored Brandt Jean’s urging Amber Guyger to “Give your life to Christ. I think giving your life to Christ is the best thing Botham would want for you.”

Coulter’s derisive contempt for Guyger leaps out in not naming her but calling her “the girl cop.”

Of course, Guyger did something Ann never does, indeed, refuses to do: repent and express remorse.

“I hate that I have to live with this every single day of my life, and I ask God for forgiveness, and I hate myself every single day. I never wanted to take an innocent person’s life. And I’m so sorry.”

“I know if you go to God and ask him, he will forgive you.”

(Coulter, herself, is a very unforgiving person.)

(Coulter, herself, is a very unloving person.)

Brandt then beseeched the judge:

“I don’t know if this is possible, but can I give her a hug, please?”

The courtroom video is poignant and profound: Brandt pleads with the judge to let him hug Amber and Amber rushes to embrace Brandt.

This was the hug that was felt around the world, but not in Ann’s heart.

Fruit of the Spirit

Of course, love is the first and primary fruit of the Spirit in a Christian’s life, something seemingly absent in Ann’s.

Galatians chapter 5 is pivotal in understanding the spiritual makeup of a Christian. 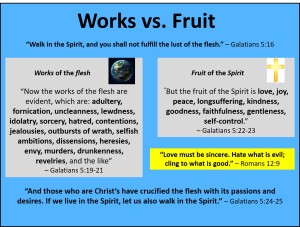 Instead of exhibiting the fruit of the Spirit, Ann is far more prone to display the works of the flesh.

What Happened to the Dog?

The real Ann Coulter was on display during a 2015 radio interview[2] which demonstrated, like Animal Farm, that some people are more equal than others and that Ann is more equal than everyone else.

At the beginning of the interview, Ann was told the heartbreaking story of an innocent woman who was struck during a high-speed car chase which resulted in her becoming a quadriplegic. Utter silence from Ann. Shortly thereafter, Coulter made jokes about car chases and joked about a suicide.

Then Ann was told about a tragedy concerning a dog. She asked, “What happened to the dog?” Hearing that he died (burned to death on live television), she replied in shock, “Awww!”

Moments later, Ann said, “I feel sorry for the quadriplegic lady, too. I don’t want you to think I’m only worried about the dog [laughs]. That was just kind of a surprise ending.”

Coulter is so intellectually agile that she immediately recognized the disparity in her reactions to two very similar tragedies and she knew the audience would take note at well. So, she instantly went into justification mode, trying to put out the flame before it became a raging fire.

Note that Coulter is more concerned with what people think of her than she is about the tragedies which have befallen others.

That segment of that interview strongly reinforced my conclusions that, for Ann, most people are worthless (worthless = worth less than Ann). To her, they are invisibles. She cared far more about the deceased dog than about the quadriplegic lady – but doesn’t want us to know that.

The Mind of Christ

The apostle Paul exhorted the Philippian church: “Let this mind be in you which was also in Christ Jesus” (Phil. 2:5).

Ann very clearly does not have the mind of Christ.

What can we do?

We can pray for her and encourage her to repent.

We can hold her accountable for her wrong behavior until she repents.

Enabling Ann to persist in her wrong behavior only makes matters worse. Moreover, failure to confront Ann with her behavior which is in direct conflict with the teachings and examples of Jesus Christ taints the reputation of other Christians and of the body of Christ and brings dishonor to our Lord and Savior.