While the Left embraces illegals and foreigners as “Americans,” Ann Coulter and the Alt-Right contend that only WASPs descended from colonists are “true” Americans.

(Remember, Coulter boasts, “I’m a settler” and a “Native American.” Coulter cherishes her Pilgrim roots, making her a self-identified authority on all things American as well as moral, culturally, and genetically superior to the rest of us mere mortals.)

However, to all those of you who cherish America and are grateful for God’s Providence in our lives and the formation of this great nation, let me wish you a Happy Thanksgiving!

Ann Coulter’s definition of “normal” is someone just like her.

In her latest column (11/16/16), Coulter argued that “the consequence of the Democratic Party’s decision in the 1970s [was] to get rid of all the normal people.”

Hearing Coulter – lover of words like “retarded” and defender of going “full-on spastic retard” – (for the sheer joy of being offensive) – use the word “normal” with regard to people almost be deemed Hitlerian.

Taken in the context of the Alt-Right’s rise to power this election cycle – an Alt-Right which would relish jettisoning the majority of mankind into the dustbin of history – Coulter speaking of “normal people” takes on far greater significance.

Remember, Coulter truly hates soccer – because it is “foreign” – and hates all foreigners and immigrants. especially Mexicans. Coulter even hates Christian missionaries for going to foreign countries.

She hates Gov. Nikki Haley for being an ignorant second-generation immigrant (meaning, she is a native-born American with foreign parents).

Coulter’s views can arguably be called anti-Semitic and anti-Catholic. She even attacks war heroes and Gold Star families.

Coulter’s hatred also extends to other Americans. She loves to call Democrats Nazis, crazy, and demonic.

Coulter hates Carly Fiorina and the GOP. Ben Carson does not fare well with Coulter. She has had a love-hate relationship with Ted Cruz. Once a Reagan-lover, Coulter now derides Reagan and his legacy.

For Coulter, “normal people” are just like her. But there aren’t too many of them because she is genetically superior to us.

The Alt-Right’s view of the world is distinctly nativist, racist, and supremacist. Ann Coulter is its high priestess and its muse. 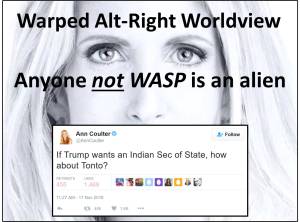 In a recent tweet, Coulter confused a native-born South Carolinian of Indian Sikh ancestry with a Native American.

Apparently one “Indian” looks like another to her. Actually, for the Alt-Right, anyone who is not a WASP is an alien.