Is the often brilliant Ann Coulter scatterbrained? One could arguably say so.

Indeed, for over two decades, Coulter has suffered from cognitive dissonance and the negative consequences of addictive thinking.[1]

Coulter’s column on 9/15/21 is emblematic of this strange phenomenon.[3]

In it, Coulter simultaneously condemns the dismantling of Confederate “antiquities,” which she calls part of her history, while taking pride in her Presbyterian ancestors who were abolitionists fighting for the Union against slavery.[4] Cognitive dissonance.

Coulter has – for decades – defended the Confederacy while simultaneously extolling her heroic Union ancestors.[6]

Coulter has insisted that everyone should listen to her yet has admitted that she’s bad at making predictions. Indeed, she has come to loathe every presidential candidate she endorsed or campaigned for.[7]

Coulter was fiercely for the war on terror before she was against it.[8]

Coulter championed tax cuts for decades but now is in favor of a (Socialist) wealth tax.[9]

Once ardently pro-life, Coulter abandoned the pro-life movement for personal and political purposes.[10]

To further understand Coulter’s wacky worldview and why she takes such contradictory positions at the very same time, see Joker: Ann Coulter Unplugged at https://bit.ly/2TttHtF.

Ann Coulter’s column this week confirms what I have been saying for years: Coulter believes America belongs to her!

Hence her being the authority on who a real American is.

Hence her dismissal of 13 heroic Americans who died in Kabul (they weren’t WASP enough).[1]

Hence her obsession with immigration and blindness to the chaos of the Biden administration (which she blames on Trump).

Coulter demands sole control over America’s identity[4] and role in the world.[5]

Coulter’s views on race, immigration, and foreign policy must be strictly adhered to or you will be denounced as a traitor. Trump’s failure – in her eyes – to pursue her agenda for America First fostered her hatred for Trump.[6]

So much so that Coulter trashed Trump despite Trump’s triumphs for peace and prosperity,[7] even going so far as to demand his second impeachment for yet another hoax and witch hunt.[8]

“My ancestors were Presbyterian abolitionists who fought on the Union side, but I get really ticked off when imbeciles take a sledgehammer to my country’s history.”

“Never has a civil war ended with such love between the former enemies. That’s our history, our country, our war — North and South, black and white.”

Coulter then segued to bashing immigrants and blaming them for the carnage (without citing any evidence):

“No, the moving force behind this frenzied destruction of American history isn’t black people suddenly offended by monuments that have been around for a century; it’s pushy newcomers, bitter that their ancestors had nothing to do with the creation of this country. After other people’s ancestors carved a nation out of the wilderness, they just kind of showed up. Now they go around obliterating anything that reminds them that this country was up and running long before they got here.”

Coulter again defended the Confederacy while undercutting her own argument:

“America’s leading hate group, the Southern Poverty Law Center, titles its report on Confederate symbols ‘Whose Heritage? Public Symbols of the Confederacy.’ Yes, exactly, it’s not their heritage, so it must be destroyed. My ancestors fought on the Union side, but they were involved, and it matters to me.”

“MSNBC’s smirking Chris Hayes can get weepy about some ancient Roman ruin, and Rachel Maddow about a building in Warsaw, but I care about my history. These savages are smashing and graffitiing my antiquities.”

Free book: Propaganda: George Orwell in the Age of Ann Coulter exposes Coulter as the quintessential propagandist who, especially this election cycle, has escalated her employment of various propaganda techniques to foist a monumentally flawed candidate upon the American people.

Trump has, indeed, adopted Coulter’s agenda, one which he would never pursue were he to win the election.

Heralding Trump as “Awesome” defames America’s roots and self-identity and besmirches all those who champion American exceptionalism and a constitutional Republic.

Highlights from Propaganda: George Orwell in the Age of Ann Coulter can be found here. The entire book is available as a free download here.

Free book: Never Trust Ann Coulter – at ANY Age proves the treachery of Coulter, and, by implication, the One whom she hails as the savior of the nation – Donald Trump, in whom she trusts.

Coulter marks time BT and AT – Before Trump and After Trump. Hubris begets hubris. Before Trump there was Ann Coulter. After Trump will verify that neither could ever be trusted.

Highlights from Never Trust Ann Coulter – at ANY Age can be found here. The entire book is available as a free download here.

Free book: Vanity: Ann Coulter’s Quest for Glory explores the narcissism and hubris which besets Coulter and her savior, Donald Trump. Both profess a desire to save America but each seeks their own glory. 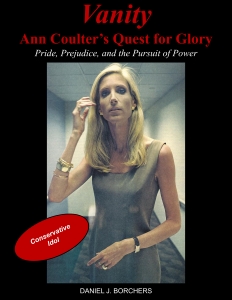 Hubris demands the fulfillment of personal ambition regardless of the consequences to America.

What is the impetus for this self-serving pride and how does it become so potent, yet, ultimately, impotent?

Highlights from Vanity: Ann Coulter’s Quest for Glory can be found here. The entire book is available as a free download here.

Free book: The Gospel According to Ann Coulter exposes charlatans like Coulter and Trump who claim allegiance to God while exhibiting allegiance only to themselves.

Ten years ago, Coulter was hailed a Christian heroine despite her often unchristian attributes. Now, many Christians join Coulter in championing a libertine “lout” (Coulter’s word) to save America from itself.

Faith has given way to fear. Why? How? What are we to believe in this season of chaos?

Highlights from The Gospel According to Ann Coulter can be found here. The entire book is available as a free download here.

Free book: The Beauty of Conservatism challenges conservatives to stand true to their beliefs and values even when fear looms large in our midst. 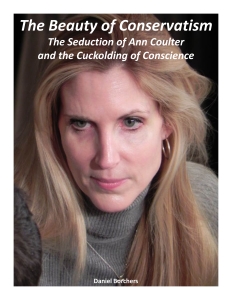 Ann Coulter pretended to be a conservative long before Donald Trump did. Together, they are endeavoring to destroy the GOP and endanger the future of conservatism.

They will succeed in losing the White House (and, perhaps, both houses of Congress) to Democrats, a tragedy which could have been avoided.

Election 2016 demonstrates the unparalleled importance of character, integrity, and principles. Absent them, rogues like Trump and Coulter prevail.

Highlights from The Beauty of Conservatism can be found here. The entire book is available as a free download here.

The apocalypse is nigh and Ann Coulter insists that only Donald Trump can defeat the Four Horsemen.

On The Drive Home (9/29/16), Coulter berated a Christian Never Trumper, saying, “So do not pretend to be a Christian when you are rooting for the destruction of the last Christian country on earth.”

Coulter’s rationale for haranguing this “nobody,” as she called him, is the same as it has been in recent years. In her mind, America is “the last Christian country on earth” and this election will decide the fate of America and the entire world.

Trump is not only her Savior, he is the savior of America and civilization itself.

Therefore, a Christian must support Trump – a non-Christian, bullying, libertine liberal liar masquerading as a conservative – in order to save mankind.

If you believe that God in heaven, Christian virtues and principles, Constitutional government and the rule of law, and liberty in the land of the free take precedence over a Trump victory in November, then you are pretending to be a Christian.

Moreover – or, perhaps, most importantly – Coulter has cast herself in the dramatic role of saving America with Trump. Because of her self-less self-sacrifice – “I feel like an insect that gives birth and then dies” – mankind will be saved. But only with a Trump victory.

Just the other day, Coulter contended that #NeverTrump is virtually synonymous with atheism.

Why Coulter’s sudden interest in Christians being Christians?

Not because of any concern for fealty to Christ. Rather, she is bullying believers into betraying their true Savior. Remember, she has repeatedly attacked Christians for being godly and pro-lifers for being pro-life.