Ann Coulter is the anti-Rosa Parks!

Recently, Coulter dismissed (no, denied) Kizzmekia Corbett’s contribution to the development of Moderna’s COVID vaccine. Coulter was outraged that the “lead NIH coronavirus researcher” would get any credit for the vaccine that she helped develop. 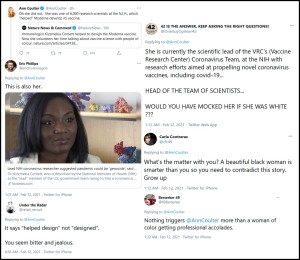 This is typical Ann Coulter, whose views on race are abhorrent![1]

Coulter claimed that Halle Berry won her Oscar by being white enough, writing: “Large-breasted, slightly cocoa women with idealized Caucasian features finally have a chance in Hollywood. They will, however, still be required to display their large breasts for the camera and to discuss their large breasts at some length with reporters.”[2]

But this fits into Coulter’s WASP,[3] Alt-Right[4] worldview. Here’s another Coulter gem: Only Westerners (especially WASPs) create and invent things:

“Democrats don’t want all immigrants. What they want is welfare recipient immigrants, which is why they’ve rigged the rules. … It’s extremely difficult to come in if you’re coming from a Western European country. However, if you are from a Third World country, ‘Welcome.’ If your genetic ancestors did not invent the wheel, ‘Oh, well, let them come in.’ But they’re the natural Democratic voters.”[5]

Unlike fine wine, Coulter’s decades-long racist views have not improved with age.

In a fascinating interview with Scottie Nell Hughes, Coulter revealed her racial confusion and racist inclinations. She said, “No normal person thinks of themself as Hispanic. They think of themselves as ‘I’m Mexican,’ ‘I’m Cuban,’ ‘I’m Ecuadorian.’ [Hispanic] is an invention of the political parties.”

If Hispanics don’t think of themselves as Hispanic but of various nationalities, then why is that not true of blacks? Aren’t they Kenyan, or Jamaican, or Haitian, or Nigerian, or …. [fill in the blank]? Yet, Coulter doesn’t deny that they are black. (In fact, she also claims that America still owes blacks for slavery, even those who emigrated after emancipation.) So, why deny that Hispanics are “Hispanic?”

What about whites? Are whites, as Coulter implies, homogenous? Are there no cultural and linguistic differences between Swedes, Polacks, Britons, French, and Italians? Yet, when it suits her, Coulter emphasizes those differences, always in favor of English WASP culture. Moreover, Coulter actively courts “white” votes to the exclusion of non-white ones.

Does anyone say “I’m Asian?” No. They refer to their national origins, whether China, Korea, Japan, Nepal, or elsewhere. Would Coulter suggest “Asia” “is an invention of the political parties?” Hardly.

It’s funny. When Coulter listed peoples to whom Trump appeals, she said: “Hispanics, blacks, Asians, Americans, white Americans.” When she said “Americans,” she quickly corrected herself and qualified it as “white Americans,” almost as if she doesn’t regard non-whites as Americans, or, perhaps more accurately, to emphasize the group of Americans she values most: whites.

Whites are crucial for Coulter’s restoration of a WASP (i.e., white) America.