What do mega-billionaire Mike Bloomberg and multi-millionaire Ann Coulter have in common? Far too much. 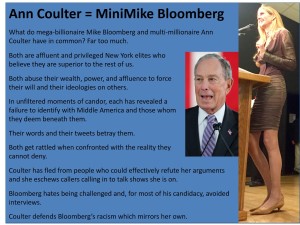 Both are affluent and privileged New York elites who believe they are superior to the rest of us. Both abuse their wealth, power, and affluence to force their will and their ideologies on others.

In unfiltered moments of candor, each has revealed a failure to identify with Middle America and those whom they deem beneath them.

Their words and their tweets betray them.

Both get rattled when confronted with the reality they cannot deny. Coulter has fled from people who could effectively refute her arguments and she eschews callers calling in to talk shows she is on. Bloomberg hates being challenged and, for most of his candidacy, avoided interviews.

Bloomberg wants to subvert the Constitution in a number of ways, including gun confiscation, a abridgment of Americans second amendment rights.

Coulter wants Trump to do a series of unconstitutional Executive Orders like Obama did. Trump wisely chose patience and discretion.

Both Coulter and Bloomberg are elites who want to tell everyone else what to do while being exempt from their own standards. Both are bullies, trying to force others to yield to their will. They are filled with hubris and devoid of compassion.

Bloomberg has been all over the political map, going from Democrat to Republican to Independent and back to Democrat.

Remarkably, Coulter has denounced every single presidential candidate she once endorsed for over the past two decades. She even has harsh words for Ronald Reagan, whom she once idolized.

Idiot conservatives were doing the idiot thing this week, screaming “racism!” in response to an old tape of former Mayor Michael Bloomberg defending stop-and-frisk, one of the policies that drove New York City murder rates down to Mayberry levels. They weren’t being ironic.

Bloomberg’s policy (stop-and-frisk) was not racist; his words and beliefs were.

Ninety-five percent of murders, murderers and murder victims fit one M.O. You can just take a description, Xerox it, and pass it out to all the cops.”

Similarly, just as every American hero looks like a conservative to Coulter, all terrorists look alike. According to Coulter, “they all look identical!” She would use “a paint chip for their skin color” to determine their guilt or innocence. In reading and listening to her commentary on terrorist profiling, it’s as if Coulter knows of only two paint chips: white and non-white.

Coulter’s obsession with racial profiling began in mid-September, 2001. By March of the following year, she had developed her bizarre, viscerally-offensive, and self-evidently false paint chip theory. Paint chips to profile? Coulter’s own unique contribution to racial demagoguery – paint chips – exceeds even South Africa’s apartheid which incorporated a complex system of racial categories.

In the end, Bloomberg crashed and burned. Coulter has suffered the same fate at the hands of President Trump.

Americans were relieved when Bloomberg ended his campaign, with many marking themselves save from Bloomberg ads.

Similarly, many conservatives want to mark themselves safe from Coulter’s commentary.

For more on Coulter’s dysfunctional views and commentary, see Joker: Ann Coulter Unplugged, which provides an in-depth, detailed and holistic exposé of  Coulter.