It would seem so. For years now, Coulter has been progressively adopting leftist dogmas, such as a wealth tax, “confiscatory taxes” (to specifically target political foes), and reparations. 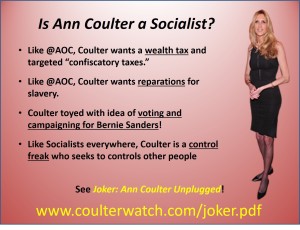 Sounding evermore like @AOC,[1] Coulter even toyed with the idea of voting and campaigning for Bernie Sanders. 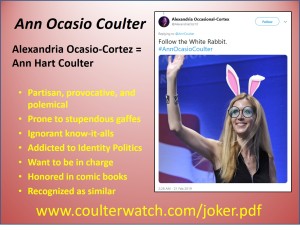 Coulter has echoed AOC’s call for a wealth tax, one which she would target against her political foes. She has called for “confiscatory taxes” to be levied upon hedge fund managers. And she has toyed with voting for – and campaigning for – Bernie Sanders!

Coulter has frequently spoken of the “benefits of local fascism,” called for suppression of liberal speech, sought to rescind the 19th Amendment (giving women the right to vote), and called for poll taxes and literacy tests for voting.

In one tweet she declared, “This is the worst, most tone-deaf speech @realDonaldTrump has ever given. Jeb! had better ideas.” (Coulter’s fallback position is to call Trump worse than #Jeb! – a candidate she deplored.)

Coulter tweeted: “Tariq: I like #ADOS, but I think it should be #DOAS – Descendants of American slaves. Not Haitian slaves, not Moroccan slaves, etc.” 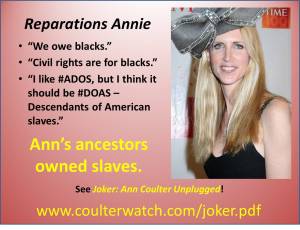 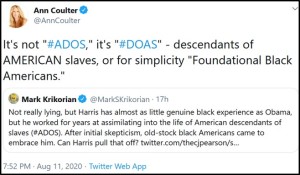 Coulter has joined @AOC in demanding a wealth tax!

Coulter tweeted: “Ocasio-Cortez wants a 70-80% income tax on the rich. I agree! Start with the Koch Bros. — and also make it WEALTH tax.”

Coulter declared, “If he went back to that position, I’d vote for [Bernie Sanders]. I might work for him.”

Joker: Ann Coulter Unplugged provides an in-depth, detailed analysis of Coulter’s worldview and character flaws which have led her to be so wrong in so many areas in which she regards herself as an expert.[2]