Ann Coulter’s latest book, Resistance Is Futile, is classic Coulter. She exhibits her characteristic flair for effectively conveying her point of view. Earlier, I highlighted what Coulter gets right – and wrong in Resistance. Here are more salient observations, many of which you are probably unaware of. 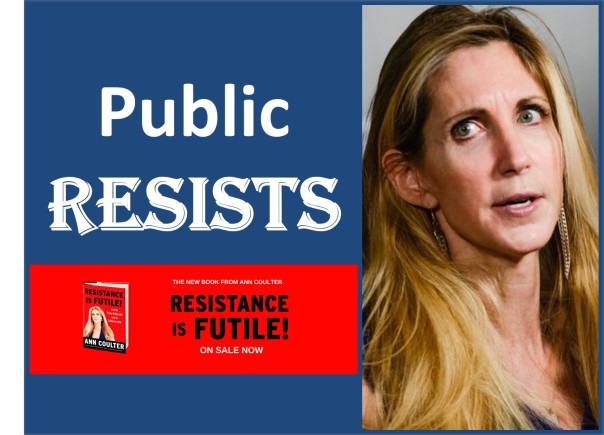 Dedicated to Deceased Bodyguard and Lover

Let me begin with what I “knew” about Resistance before it was published. I knew (from the very moment I heard the announcement that she was writing another book) that Coulter would dedicate this book to Floyd Resnick, now deceased. (Her second book, Slander, published in 2002, was dedicated to her deceased former editor, Robert Jones.)

I fully expected Resistance to be dedicated to Resnick, Coulter’s faithful, long-time bodyguard and lover. For a time, Coulter’s speaking contract even required first-class airfare for two. They went everywhere together. 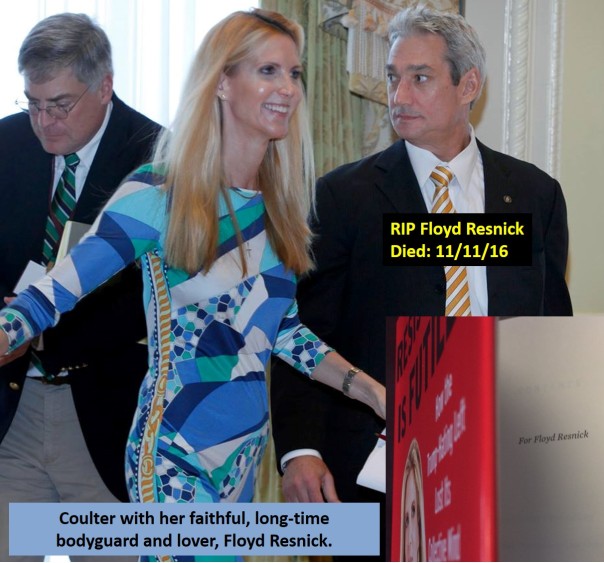 I knew Floyd and, at one CPAC conference many years ago, I saw him lead Ann by the hand through the crowds, displaying a certain casual intimacy.

Coulter’s 13th book was released on August 21st to much fanfare and debuted near the bottom of the New York Times bestseller list (#14), only to precipitously plunge into a black hole the following week.

Her book’s disappointing showing (by Coulter standards) cannot be attributed to media bias as several similarly-themed books appeared higher on that list for longer periods of time.

Her (thus far) failing book tour and abysmal sales may be puzzling to some (my own forthcoming book will shed ample light on many factors for this), especially given Coulter’s energetic efforts to achieve success: two book launch parties; intense promotion from Breitbart, Daily Caller, and other Coulter-friendly news media; two appearances on the Rush Limbaugh Show; several appearances on Tucker Carlson’s highly popular Fox News TV show; and a slew of radio, television and print interviews.

Many Coulter followers don’t trust her because of her past history of lies and deception and her Romney-like shifting political positions.

Coulter’s biggest and most vocal fans support her immigration stand. Many of her fans are fixated upon her, in their words, being “hot.” Some of her biggest detractors are pro-Trumpers outraged at the depth and degree of her attacks on Trump. (It is striking that Trump has yet to comment on Resistance Is Futile.)

By my (albeit unscientific) observations, among her following, Ann has some very ardent admirers, many who are neutral and – to use a journalistically “precise” term – a helluva lot who vehemently hate her. (It is as if they follow her merely to criticize everything she tweets.)

Despite all of the positive factors favoring success, after three weeks, Resistance had sold in the mere tens of thousands. (Her previous book, In Trump We Trust, didn’t even make the bestseller list!)

Her fourth week also saw her fall short of a resurgence on the bestseller list, even though audience members at her speeches (Acushnet, MA, and Concord, NH) “purchased” her book as part of their tickets. (People wanting to meet Ann had to buy her book.)

Coulter on Her Own Book

But what does Coulter say about Resistance?

Coulter typically boasts that all of her books are blockbusters (even when they’re not even bestsellers) and that her columns are excellent. On the Mark Simone Show (8/16/18), Coulter bragged,

“The chapter titles are excellent and they’re very short chapters with lots of headings because I am part of the Twitter generation. And notice it’s a nice short book. It has a lot of footnotes.”

I was particularly struck by one phrase, “I am part of the Twitter generation,” which is utterly absurd, yet she has repeated it on multiple talk shows, evidently considering it a snappy soundbite. If Coulter is part of a Twitter “generation” – whatever that is – then that “generation” spans scores of years.

Twitter was made for Coulter. She has always been good at quick quips and snappy repartee – thus perfect for Twitter. (Though she is prone to gaffes when tweeting off-the-cuff.)

But, no, she is hardly part of a Twitter “generation” which is largely populated by millennials and Generation Z, but also encompasses people of all ages. There “are over 67 million Twitter users in the U.S.”

People using a social media platform who range in age from young children to senior citizens can hardly be called a “generation.” Is Ann trying to recapture her youth? Appear hip? Relevant? Perhaps she is trying to make herself more relevant or appear younger than she really is.

Coulter’s writing is solid, including her trademark penchant for hyperbole, as with her concluding chapter title: “For Democracy to Live, We Must Kill the Media.” (Where’s the guillotine?)

(Presumably, Coulter is referring to the #FakeNewsMedia and not genuine journalism. Is Ann not part of the media? She is unclear as to whether she is targeting the institutions themselves, or the people within those institutions.)

As this table of contents indicates, Coulter addresses the hot issues of the day.

Coulter’s titles are often clever and this one – Resistance is Futile – is no exception. Coulter effectively merges a contemporary political and cultural phenomenon with a well-known pop culture meme from twenty years ago. 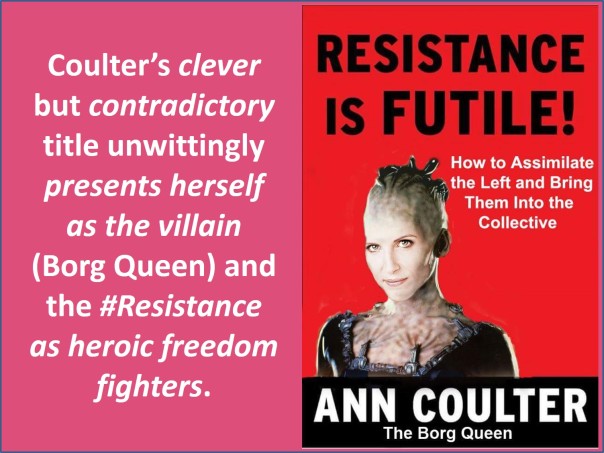 But, as with so many things Coulter, contradictions abound, and, in this case, her title itself proffers confusing ideological optics.

Within her book, Coulter accurately conveys the ultimate end results of the Left’s #Resistance movement while adopting its faulty historical and political precepts.

The Left’s #Resistance movement carefully portrays itself as comparable to and the moral heirs of the French Resistance in World War II, when, in fact, they are the enemies of Liberty, Equality, and Fraternity.

In Casablanca, Rick Blaine is the reluctant freedom-fighter while Victor Laszlo (not an American) is the courageous leader of the French Resistance. The Left loves Bogart’s character, but, now, have adopted Paul Henreid’s serious, combative, and irrepressible hero as a standard-bearer for their own cause – a cause against which the French Resistance would have ferociously fought.

Similarly, while Coulter’s Resistance is Futile accurately identifies the tyrannical and thuggish behavior – and anti-Liberty, anti-American nature – of the #Resistance, Coulter herself frequently emulates their ideology, behavior, tactics, and rhetoric.

Ironically, Coulter has chosen for the title a slogan beloved by tyrants from antiquity to sci-fi villains of the future (most notably, the Borg).

Coulter’s clever but contradictory title unwittingly presents herself as the villain (Borg Queen) and the #Resistance as heroic freedom fighters.

The irony of Coulter’s latest book title, Resistance is Futile, can’t escape one’s notice. It is a tyrannical imperative that has rung through the ages, most recently by the Nazis and Soviets (and other Socialists), the aliens of V, and, most memorably, by the Borg in the Star Trek franchise.

Strikingly, the Borg demand assimilation, as American nationalists do, albeit in a decidedly un-American, tyrannical, non-Melting pot paradigm.

In 2015, Coulter spoke at the Eagle Forum’s Collegiate Summit, saying:

“There was no pussyfooting around. We’re assimilating you, you’re here, and you’re going to be an American. There will be no celebration of Cinco de Mayo, there will be no Ramadan, in fact there won’t even be a Feast of the Immaculate Conception – we are an Anglo-Protestant country, and you will learn about the Battle of Valley Forge.”

In Resistance, Coulter addresses very real problems of tyranny, violence, and mob rule on the Left while using a construct to promote her own hive mentality of the Alt-Right.

Coulter Is Part of the Resistance

Another great irony during the Trump presidency thus far is that Coulter has frequently been part of the #Resistance! She has often attacked Trump’s positive agenda (tax cuts, deregulation, and peace through strength, which she describes as commitment “to the Military Industrial Complex”). Coulter also frequently raises the specter of impeachment.

Coulter told the Independent Journalism Review, “I would do it all over again. I would write In Trump We Trust all over again. At least he’s saying things. He may not be fully following through and I do have to swat him on the nose with a newspaper every once in a while.” 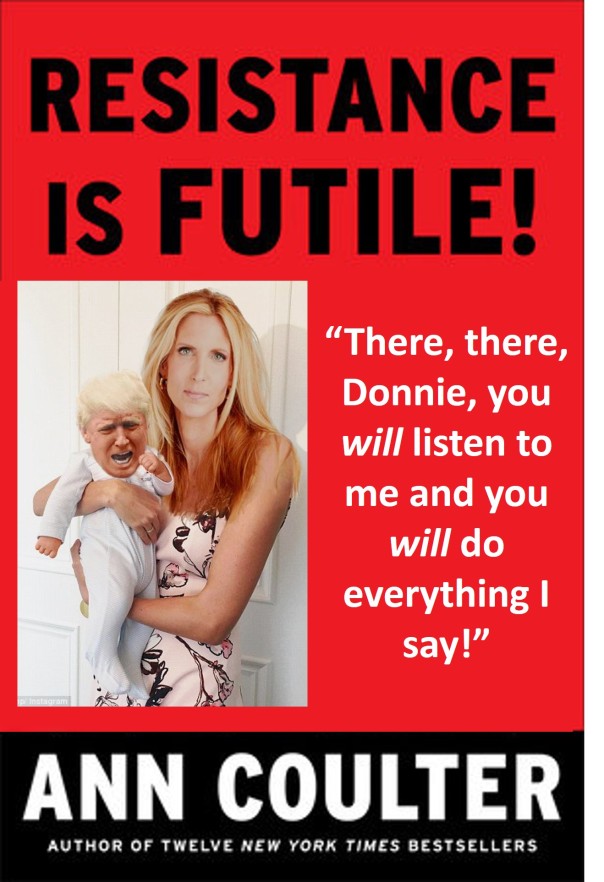 To Rush Limbaugh and his audience, Coulter said Trump “has a suck-up personality” and his “presidency is more of a transactional presidency. He does have to be swatted on the nose with a rolled up newspaper when he goes astray.” In other words, Coulter knows best!

Last year, as reported by the Washington Examiner and other media outlets (emphasis added), “Coulter said she and Trump were involved in a profanity-laced screaming match in the Oval Office last year over his immigration policy.” (Coulter claims that Trump “started it.” Still, Ann, it’s not a good approach to win hearts over to your side.)

Not to be outdone, on The Next Revolution (9/16/18), Coulter argued, “If the Resistance were smart, they’d read my book and attack Trump for not building the wall.” 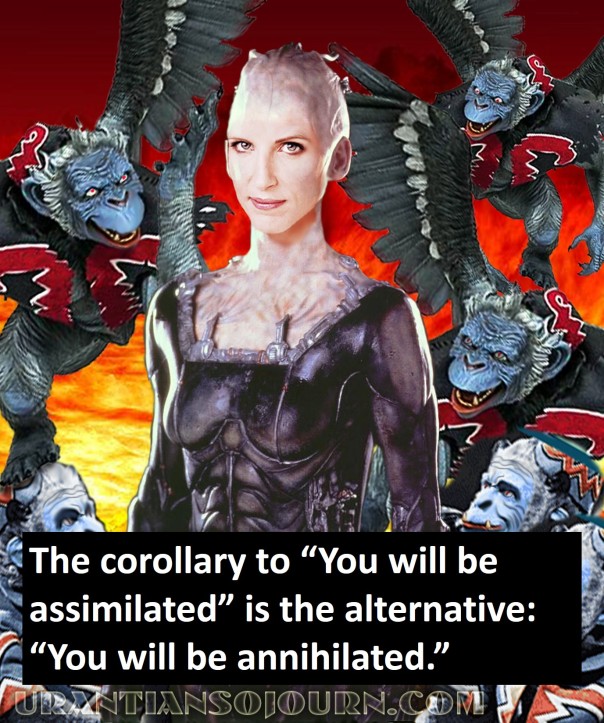 Coulter has always had a bit of a Borg mindset. In the early 1990s, she wanted to eradicate feminism. Post-9/11, her mantra was “Kill, kill, kill.” In the 2000s, Coulter constantly spoke about how wonderful it would to have a world without liberals. During that same period, she was engaged in a jihad against both liberals and jihadists. Prior to and during the last presidential election cycle, Coulter sought the death of the GOP. (On September 23rd, Coulter’s tweetstorm demanded that we “crush the GOP.”)

Now, Coulter seeks the death of the press: “An essential component of saving the country is absolutely destroying the press. Not a brick upon a brick should remain. Then it can be rebuilt on more ethical lines.” (She fails to make clear distinctions between the #FakeNewsMedia and objective journalism.)

Coulter’s conclusion in Resistance is “We Must Kill the Media.” On The Next Revolution (9/16/18), Coulter pondered, “Maybe we do have to destroy everything first” – something a cultural Marxist would say.

Remember, Coulter has been a canvas-cleanser for most of her adult life.

Coulter’s Resistance Is Futile has just been released. Here are a few observations.

What Coulter Gets Right

This quote encapsulates what is right in Coulter’s book:

“Nothing the Russians ever dreamed of could compare to what the Resistance is doing to democracy, obliterating the will of Trump voters, who wanted him to get to work on urgent problems.”

“It is nothing less than a coup.”

Trump Derangement Syndrome grows daily and hourly, exposing every segment of the Progressive movement for what it is, from politics, to academia, to Hollywood, and the – now blatantly out in the open – #FakeNewsMedia.

Other books have recently (or will soon be) released which tell the very same story.

What Coulter Gets Wrong

Coulter ludicrously contends that the Left hates Donald Trump because he is “icky” – that he is a departure from the debonair and erudite Barack Obama. This is hogwash. If Trump pursued Progressive policies, they would love him.

Far from being squeamish about “icky,” the Left embraces it. Witness Harvey Weinstein, Kathy Griffin, so many of the presenters and awardees at Hollywood events, the Ann Coulter Roast, etc. Remember Michelle Wolf at the National Correspondents Dinner? Truly icky!

Ickiness is part of the Left’s DNA. They merely use charges of ickiness to attack Trump and try to peel off some portion of Middle American support for him.

Icky does not matter to the Left. It didn’t in the 1960s and it doesn’t now. The Left was enthralled with the Clinton presidency. Even now, they want Hillary back. (Ick!)

Throughout her media career, Coulter has conflated style with substance (often preferring the former to the latter) and she continues to do so to this day.

What the Left hates about Trump is his devotion to America, his erasure of the Obama legacy, his opposition to the Progressive agenda and identity politics, and his Making America Great Again.

Trump stands up for America, not against her. (That is what the Left considers the real “Ick!”)