Ann, not Matt, is the wacky one!

Coulter is the Real Culprit!

But it is Coulter – not Drudge – who has done the following:

Coulter wrote a book, In Trump We Trust, and, for three years, has not trusted Trump.

Coulter wrote a book, Resistance Is Futile, and has joined the (futile) Resistance as one of its most vocal and virulently hostile critics of Trump.

Coulter had a lengthy, infective-filled shouting match with the President – in the Oval Office – and is actually proud of her moment of ignomy.

Coulter is the alleged “conservative” who has, over the course of three years, threatened and bullied the President of the United States with impeachment if he does not do exactly what she wants done the way she wants it accomplished.

Coulter is the alleged “journalist” who has engaged in a nasty name-calling campaign against President Trump for three years, vilifying his character, integrity, intelligence, and America First agenda. No reputable, objective journalist would do that! (Is Ann auditioning for CNN?)

Highlights of Coulter’s Invective Against Trump

In a rather strange interview with Politico, Coulter expressed her frequent frustration with Trump “getting the details wrong” and going off-script. So much so that Coulter said three times: “I wanted to shoot my TV.”

“The wall and deporting illegals … renegotiating trade deals and not starting pointless wars – those are the big ones. If he betrays us on those, they’ll impeach him and there’ll be nobody to defend him.”

According to The Times, Coulter told Trump, “I’m the only one losing money trying to get you in the White House, you’re going to listen to me.” After Trump’s immigration flip-flop, a piqued Coulter joked, “He just said something stupid, which he’s done before, and he will do again … he does need a little slap now and then.”

“Then it will be a bloodbath. Not only Trump, but also the entire GOP, is dead if he doesn’t build a wall. … It would be an epic betrayal … If he can’t do that, Trump is finished, the Republican Party is finished, and the country is finished.” – Ann Coulter, 4/26/17

“If you defend this man [Trump], I am coming down to your studio and holding your head under water until the bubbles stop.” – Ann Coulter, 5/3/17

“In order to prove he doesn’t have dementia, as alleged in a recent book, President Trump called a meeting with congressional leaders on Tuesday – and requested that it be televised. … He then proceeded to completely sell out the base and actually added to his problems by appearing senile.” – Ann Coulter, 1/10/18

“Trump’s claim that he was pulling out of the Iran deal in order ‘to protect America’s national security interests’ is a big, fat lie.” – Ann Coulter, 5/9/18

“The Swamp has succeeded beyond its wildest dreams. Trump seems to have completely forgotten about the one policy the left fears most.” – Ann Coulter, 9/5/18

“If he offered to pardon witnesses in exchange for their agreement to blame Steve Bannon for shooting Kushner – again: excellent example of obstruction of justice … But Trump hasn’t shot Kushner, and he probably won’t, since he doesn’t even realize that Kushner is wrecking his presidency.” – Ann Coulter, 9/13/18

“If Trump doesn’t keep his immigration promises, Hillary might as well have won. Trump will leave no legacy whatsoever. Without a wall, he will only be remembered as a small cartoon figure who briefly inflamed and amused the rabble.” – Ann Coulter, 11/28/18

“Either Trump never intended to build a wall and was scamming voters from the beginning or he hasn’t the first idea in how to get it done and no interest in finding out. My prediction is his support will evaporate and Trump will very likely not finish his term and definitely not be elected to a second term.” – Ann Coulter, 12/19/18

“But you’ve chickened out. The only edifice you have built is constructed of tweets, press conferences and speeches.” – Ann Coulter, 1/23/19

“The longer our border stays open, the more I think Trump colluded with Russia.” – Ann Coulter, 2/12/19 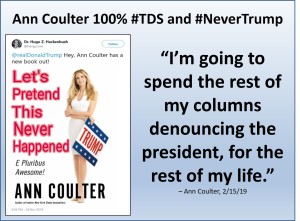 “The bill President Trump signed last Friday is worse than anything Hillary could ever have gotten through Congress.” – Ann Coulter, 2/20/19

“It turns out that instead of taking us away from hell, he’s zigzagging all over creation, sometimes getting stuck in a parking lot, sometimes heading straight for hell, then suddenly taking a left at the last minute, so that it’s never clear where we’re headed.” – Ann Coulter, 5/8/19

“Throughout 2016, we gave Trump cheese crackers every time he said, ‘Build the Wall!’ Yet, as with the Myna bird, it turns out he lacks any comprehension of what those words mean.” – Ann Coulter, 5/20/19

“Instead of Kobach, who could have saved the country, Trump appointed a series of imbeciles, who managed to engineer the worst immigration crisis in the nation’s history.” – Ann Coulter, 6/26/19

Yes, Ann, YOU are the #WackyNutJob!