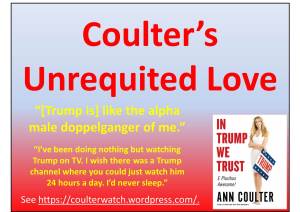 As reported in The Times (emphasis added):

“At present, though, as near as I can tell, the great love of her life is Donald Trump. ‘I’ve been doing nothing but watching Trump on TV,’ she says. ‘I wish there was a Trump channel where you could just watch him 24 hours a day. I’d never sleep.’”

When she was asked to describe her actual relationship with Trump, Coulter replied, “Blind worship.”[1] Coulter amplified her answer, “It’s a little like the North Korean people with their dear, dear leader.”

Coulter eagerly admits that she would actually like to marry him! Yes, marry! “I totally would [marry Trump if he were single].”

Coulter’s Trump love is really self-love. Coulter said, “I also think he’s like the alpha male doppelganger of me.” Perhaps looking in the mirror, Coulter exclaimed, “Donald Trump, I love him because he does talk a little like me, which is to say, blunt.”[3]

For about a year, Coulter has called Trump “the greatest candidate for president ever”[4] and “the candidate I’ve been dreaming of.”[5]

Hers is a self-sacrificial love, according to The Times:

“For his sake, she says, she has been prepared to wreck her career. While he campaigned in the primaries, she followed him from state to state, appearing on local talk radio shows. She met with Trump and told him: ‘I’m the only one losing money trying to get you in the White House, you’re going to listen to me.’”

Well, maybe more demanding than self-sacrificial. Trump must toe her line. After Trump’s immigration flip-flop, a piqued Coulter joked, “He just said something stupid, which he’s done before, and he will do again … he does need a little slap now and then.” And Coulter is happy to do the slapping. (Sounds more like a nagging girlfriend than true love to me.)

In what could be termed a lovers’ spat, on the very day of Coulter’s book launch, Trump sabotaged her paean to him by betraying the central premise of her book and its raison d’etre. Trump flip-flopped on immigration. 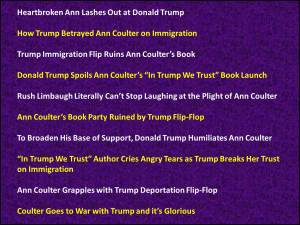 Did Trump pick that particular moment in time due to political expediency or to reverse his abysmal poll numbers? Or was it, perhaps, something more personal – a battle between two unyielding narcissists.

Ego vs. ego. Narcissist vs. narcissist.

Perhaps it was months of Coulter taking credit for Trump’s policies. As reported by Breitbart News, “Coulter’s last book, Adios, America, provided a blueprint of sorts for Trump’s campaign.”

Perhaps Trump bristles at the thought of Coulter being called “Trump’s Brain.”

Perhaps it was the Times headline: “The woman who tells Donald Trump what to think.” 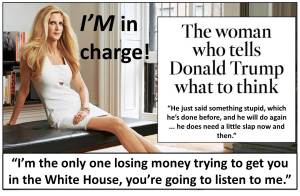 In July 2015, acting like a petulant, jilted lover, Coulter grumbled, “Yes [Trump got an advance copy of Adios, America!], I’ve been broadcasting it like mad. I don’t know why he won’t admit it. … I’ve detailed everything he’s saying. He gives the campaign speeches on it. My book is the footnotes.”[6]

Ann does not take rejection well.