In the space of a few short years, Coulter turned from being a neoconservative zealot to a Fortress America fanatical isolationist and pacifist.

Her current isolationist and nativist obsession with “pointless wars” in foreign lands leads her inevitably to conclude that World War II was also a pointless war. 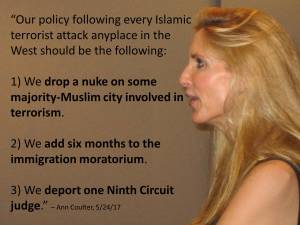 Coulter’s foreign policy heart lies with that of one of her mentors, Patrick Buchanan.

During the Clinton presidency, Coulter continually denounced the administration’s use of military force overseas, arguing that it was not in our national interest.

In 1997, Coulter said, “I don’t think we should be trying to go around and be the world’s Policeman because you can guess wrong. I mean, we can’t create a beautiful constitutional democracy across the world.”[1]

Bur for fully a decade following 9/11, Coulter was the fiercest armchair war hawk in America. Toward the end of the Obama presidency, Coulter reversed course, returning to her Buchananite foreign policy roots. (She could easily join the “War Is Not the Answer” crowd if it were more pro-American.)

Once a zealous moral and cultural conservative and fervently pro-life – “There’s almost no conversation I couldn’t turn into an abortion discussion.”[2] – Coulter turned her back on the unborn for most of the past two decades. Instead, the political realm possessed Coulter, and, following 9/11, Coulter attacked everyone.

My first essay critical of Coulter in BrotherWatch (January 2002) began with these words:

Coulter’s stance on the Korean Peninsula is emblematic of her approach to geopolitics. She also hates our pro-Israel policies and would just as well jettison the War on Terror completely. (Coulter always frames terrorist threats as immigration threats,[3] having absolutely no solutions to the domestic threat posed by ISIS and ISIS-inspired terrorists currently in America.)[4]

Of course, her Fortress America paradigm blindly dismisses the very real and existential threats facing America today and in the near future posed by terrorists and tyrannical, America-hating regimes around the world.

Coulter now denounces the Reagan Doctrine’s formulation of “peace through strength” and she appears oblivious to the renaissance of peace and prosperity which Americans enjoy today – due to Trump’s emulation of Reagan’s proven policies.

Coulter’s single-minded fixation with immigration and a wall has given her a myopic perspective on reality and the world in which we live. She has tunnel vision – like a horse with blinders on – and is oblivious to anything which does not fit her own pet paradigm.

As is always the case, anyone who disagrees with her perspective and agenda is a traitor or evil – even though she herself has completely reversed many of her positions over the past two decades. (At one point or another, she could have called herself a traitor.)

Coulter went berserk over Trump’s visit to the Wailing Wall:

On the eve of Trump’s major prime time national address regarding a national crisis on our southern border, Coulter reversed her position, issuing a series of nonsensical tweets attacking President Trump.

The following chart encapsulates a few of Coulter’s transitions and key transformative periods during Coulter’s professional career as a “journalist.” 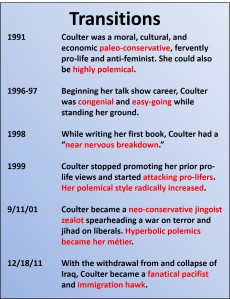 Joker: Ann Coulter Unplugged provides an in-depth, detailed analysis in this holistic exposé of how and why Coulter has become such a warped human being.

Ann’s brokenness provides an object lesson for all of us and, hopefully, this book will act as an intervention to help Ann face her deep brokenness and motivate her to seek healing and restoration.