On Wednesday, Coulter went on a half-hour Twitter rant upon reading a New York Times story about the chaos on our southern border. Her condemnation was a mixture of hatred for immigrants, hatred of liberals, and hatred of liberal Christians (who, in her mind, not only aren’t Christians at all, but don’t even believe in God).

Above all, it was an arrogant expression of self-righteous indignation. 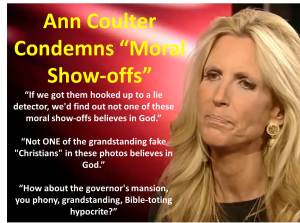 Before continuing, it would be worth reading her complete set of tweets on the subject. 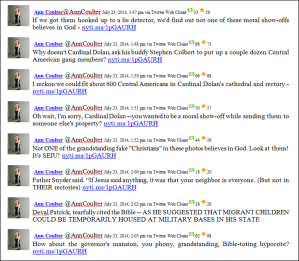 Notice Coulter’s intense hatred of people – church leaders and parishioners alike – whose theology compels them to adopt political positions with which she disagrees.

Because Coulter does not agree with them, they must be lying hypocrites. She claims none of them believe in God!

Because she regards them as “fake ‘Christians,’” then something other than biblical doctrine must be motivating them, such as personal aggrandizement. These “moral show-offs,” in her mind, are “phony, grandstanding, Bible-toting hypocrite(s).” Consequently, Coulter impugns not only their motives but their character.

Pretty tough words for people Coulter has never even met!

But that’s our Ann.

I remember when she spoke of censoriousness on MSNBC. In defense of smoking and the tobacco industry, Coulter said …

“The main overarching point I wanted to make is that I think, especially since listening to the callers, and the sort of moral fervor and censoriousness – I think it’s a strong human impulse to be self-righteous and censorious and, now, it’s gotten to the point where we can’t be self-righteous and censorious of the things that humans have been censorious for the past 5,000 years, like illegitimacy, like deserting your country in a time of war … It’s because we are not censorious and self-righteous about promiscuous sex, not to say perverted sex, all of the censoriousness comes bubbling up and it’s all directed to smokers. I mean, people who are handing out condoms in schools are the ones who are most upset about smoking.”[1]

But as we have seen, Coulter is incapable of controlling her own “strong human impulse to be self-righteous and censorious.” All of her “moral fervor and censoriousness” “comes bubbling up” – and it’s all directed at liberals!

Coulter, devoid of charitable impulses, cannot grasp simple Christian charity. She is right that the government should not be involved in dispensing compassion. But she attacks individuals, charities, and churches for doing what they are called to do. See “Ann Coulter Auditions for U.N. Ambassador” at http://t.co/R7IDzwnUJ8.

Is Coulter a Moral Show-off?

Let’s think about that. Consider a sampling of her books:

Since even before 9/11, Coulter has portrayed and promoted herself as the premiere representative of patriotism and godliness. Would that qualify as being a “moral show-off?”

The Beauty of Conservatism at www.coulterwatch.com/beauty.pdf.

The Gospel According to Ann Coulter at www.coulterwatch.com/gospel.pdf.

Never Trust Ann Coulter – at ANY Age at www.coulterwatch.com/never.pdf.