Ann Coulter wants to destroy the GOP (and, ultimately, America, in the process).[1]

Donald Trump is Coulter’s current Savior[2] – and America’s, too. So says Ann. 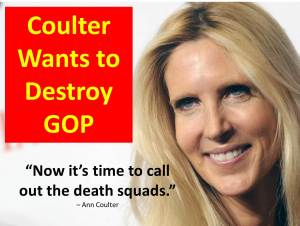 For many election cycles, Coulter has promoted RINO candidates and vilified conservative ones. For several years, she has insisted that we always vote R regardless of any questionable conservative credentials of the candidate.

Coulter has defamed the Tea Party,[3] pro-lifers,[4] and Christians[5] – all to promote her RINO of the day.

Coulter has even joyfully contemplated the demise of the Republican Party – all out of pique over its failure to be transformed into her image. (Ironically, Coulter has promoted many candidates who, like her, are unprincipled.)

Now, Coulter insists that we preempt the nominating process in order to coronate her candidate. Her most recent column title says it all: “It’s Time for the Other 13 Candidates to Drop Out.”[6] (My column, “Coulter Hates All GOP Candidates But Trump,”[7] was posted the day before hers.)

Coulter has always regarded herself as a king-maker[8] and has been ever-willing to circumvent the electoral process.[9]

Let’s be clear here: Coulter wants to destroy the GOP over immigration using Trump as her weapon.

With whom would she replace the GOP? The Tea Party she has attacked for several election cycles? The genuine conservatives she has trashed in pursuit of her own agenda? Her dwindling fan base?

A gloating Coulter opined, “it’s apparently considered a devastating attack for Republicans to go on Fox News and say, ‘He’s not a real Republican.’ Well, OK, half the country is say, ‘Oh, he’s not? Fantastic!’ … I think this is an incredibly important election year. This could be the end of the Republican Party. It could go the way of the Whigs.”[10]

And again, “With Donald Trump, I think we may be seeing the breakup, ironically, of the Republican Party, like something we haven’t seen since the Republicans broke away from the Whigs.”[11]

As Jamie Weinstein noted, “If [Trump] won it would be the death of the conservative movement.”[12]

Coulter seems to cherish the thought. Why? During Tuesday’s debate, Coulter tweeted: “Audience so stacked with RNC toadies!!!!! I’m surrounded by America’s enemies!”[13]

Coulter has already vilified every Republican candidate (save Trump), saying she hates them.[14] Coulter claims that all of the GOP candidates (save Trump) are awful, embarrassing, and unpatriotic.[15]

What to do with a party you hate, with candidates you regard as America’s enemies? Coulter’s answer: Destroy them!

Time after time, Coulter has stated her goal of destruction, saying, “All we’ll have to do is organize the death panels for the people who destroyed America, and map out whose graves will be desecrated.”[16]

Again, “No, I’m just not getting to the point that I think the only the only thing left for us to do is death squads.”[17]

Coulter’s warning before the 2014 election: “We’ll vote one more time for Republicans. You screw us on immigration, we are done. At that point, there’s no point to anything except organizing the death squads.”[20]

What if Coulter had backed staunchly conservative candidates[21] instead of her “magnificent” RINOs? (All Republicans, like pundits, are not equal.)

What if Coulter had insisted on principles over pragmatism? (Unscrupulous people don’t have principles.)

What if Coulter has been true to her espoused core beliefs instead of trading them in for a fantasy? (The only thing Coulter seems to believe in is herself.)

What if, instead of vilifying true conservatives, she had kept her mouth shut? (That would truly be a miracle.)

Perhaps we would then have a Republican Congress and White House which abides by the Constitution and pursues a conservative vision for America.

“But whatever divisiveness a contested convention might bring, whatever fissures within the party it might deepen, there would be nothing more destructive to the GOP than a Trump nomination. If anything, taking this to the convention and fighting until the bitter end is a necessary battle for the soul of the party of Lincoln and the movement it has come to be associated with. There can be no catharsis unless the resistance is fierce.”

[12]             Jamie Weinstein, Drive at Five, WMAL, 12/11/15. I realize that conservative and Republican are not interchangeable. (Apparently Coulter does not grasp that distinction.) In the context of this column, one main point is that we have not nominated and elected enough genuine conservatives as Republicans. At the moment, the only political party with a conservative orientation is the GOP. Coulter has nothing with which to replace it.