Playing the victim yet again,[1] Coulter recently claimed, “Try to find me on TV. I’m what’s known as a Trump supporter. Banned.” 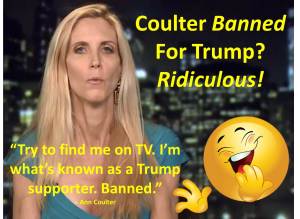 Coulter banned for supporting Trump? Is Coulter’s claim true? Will you believe your own eyes or believe Coulter’s lies?

What about Fox News, Coulter’s former home base (she has appeared on that network at least 450 times)?

So, why hasn’t Coulter appeared on Fox News since September 17, 2015? Is it, as she claims, because she is a Trump supporter? Obviously not.

Asked in January if she had been banned by Fox News, Coulter insisted, “No, I’m boycotting them! I’ve joined the Trump boycott!”[2]

What Trump boycott? As of January 26, 2016, Donald Trump had already appeared on Fox News and Fox Business News 132 times[3] – far more than any other candidate. That number has undoubtedly skyrocketed since then. (See also Steve Deace’s analysis at “Trump’s Cancer Spreads to Fox News.”)

The Real Reason for Coulter’s “Ban”

If Coulter has been banned from Fox News (the only network she really cares about), it is not because she is Trump’s biggest supporter and consigliere.[4] Rather, Coulter’s own behavior and obnoxious views have precipitated a sharp decline in the attention which would normally be lavished upon her.

The tipping point occurred in mid-September when she first attacked Jews, then Catholics.

Coulter’s infamous rant against Jews[5] cost her both speaking engagements and television appearances.[6] She had been slated as a presenter for both Media Research Center’s Dishonors Awards and David Horowitz’s Restoration Weekend. She was discretely disinvited from both of those prestigious events.

Coulter’s phony excuses[7] failed to convince critics and fans alike. On the heels of her anti-Semitic tirade, Coulter went on an anti-Catholic rant, the first of several to come. Coulter repeatedly attacks Catholics[8] for being Catholic. She just won’t stop.

Playing the victim, Coulter is nevertheless the victimizer.[9] Vanity hinders her repentance,[10] something she has always been loath to do. Until she does, she should be shunned. In the meantime, she is desperately in need of your prayers.[11]

Update: “A new report confirms that five television networks cut a deal with Donald Trump that has effectively turned their coverage over to the Republican frontrunner and turned the networks into Trump propaganda arms.”

As of this writing (4/13/16), “Trump has appeared on Hannity an astonishing 41 times since he announced his campaign last June, often for the entire hour.”

Ann Coulter must be living in a bubble. Election coverage must have somehow escaped her.

Ever eager to sell Trump as the only viable GOP candidate, Coulter claimed, in this week’s column (emphasis added), “What’s impossible is for any Republican candidate, other than Trump, to win a single state Romney lost.”

Actually, many of those Romney defeats were turned into non-Trump victories in primaries and caucuses already held!

Kasich won in his home state of Ohio.

Cruz won in Iowa and Maine, and it looks like he is headed for a resounding victory in Wisconsin next Tuesday.

Last August, Coulter moaned, “I just want a Republican who can do math.”

How about one who can keep up with the news?