Ann Coulter’s last column during the Trump presidency is arguably her worst column ever!

“As much as I can translate the stream of consciousness, Coulter is unhappy at Trump’s inaction and his family, among other things. It’s hilarious that she wrote an entire book in 2016: In Trump We Trust: E Pluribus Awesome! and did her usual, dim-witted fangirling on Fox News throughout the campaign and in the first year of his administration. Must have sold a lot of books.”

“Now Coulter does her best to malign him and everyone in the administration at every turn, whether it’s over the way he handled border issues, Supreme Court nominations, COVID, or the election challenges. There is nothing that Trump can do to make up for her heartbreak. Coulter acts very much like a jilted lover, except she’s the one that did the jilting.”

In a beautifully-expressed but tragically-deranged column, #TDS-addled Never Trumper Ann Coulter vented her eternal enmity for Donald Trump and his family, and she again attacked Israel and Jews.

Coulter’s column was filled with malicious mendacity and a potpourri of petty (phony) polemics. Coulter – a lover of Orwell’s 1984 (a book she re-reads every year) – employs many of Big Brother’s techniques in her own work,[1] and, in this column, goes full-bore Ministry of Truth which the former Soviet Union’s Pravda would applaud!

At times, her words were exquisitely-penned, yet irrational and counter-factual (i.e., Ann lied). 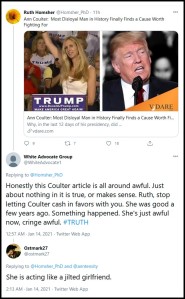 Coulter again launched an attack on Jews and Israel.[2]

Coulter even joined the chorus of leftists with another big lie, that Trump incited a riot! Notice her derision toward “gullible” Trump supporters who could be goaded “into criminal activity.” She claimed – without proof – that Trump “unleased” a “mob” and was “delighted” to do so!

Coulter’s tweet about her column was ratio’d – big time! People quickly recognized it as fake news, hogwash, and baloney!

Respondents called Coulter a “crazy maniac” who is “a caustic and toxic influence on American culture and politics. 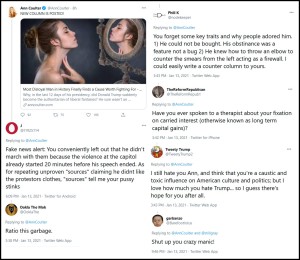 Coulter has been subject to the forces of addictive thinking for decades: denial, rationalization, and projection to name a few.[3]

Coulter is wrong about this one, too. Indeed, Coulter is engaging in a great deal of projection as she is the one who uses and discards people.[4]

Will Coulter ever see herself for who she really is? Or see reality with clarity? Pray that God remove the blinders and scales from her eyes. Otherwise, she will remain a bitter, angry, old woman.